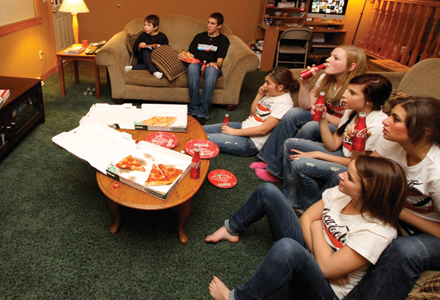 Then and Now: House Party

In our Then and Now series, EM revisits old event marketing trends to find out where they’ve gone since we first reported on them. Are they old hats and has-beens? Or is that past up-and-comer a future best practice that’s now an industry standard? In this eco-installment, we re-examine in-home events, which we began covering in 2007.

In October 2007, Advertising Age reported that Nintendo Wii led the way in the video game category with 403,600 unit sales, which was about double what its rival Xbox 360 made that same summer. Nintendo Wii’s numbers blew up in part because of a series of small, in-home Moms Night Out parties where mommy bloggers around the country got together to try out the product. The word of mouth both live and online spread like wildfire. At the same time, other brands were dipping their toes in in-home parties, too. The king of in-home brand events was Irvington NY-based House Party, which matched up brands who wanted to throw in-home events with its database of 125,000 consumers willing to host them. At houseparty.com participants could pick from a list of upcoming parties to host. House Party sent out a party pack (filled with fun, brand-related items) to each host a week prior to the event and on event day 1,000 or more simultaneous house parties were held. The host was required to blog and post photos about the event at a program-specific microsite linked from houseparty.com.

Since then, not much has changed in terms of what happens at in-home events, but what has changed is the digital strategy marketers are using to drive more results from house parties by integrating Facebook and Twitter into the experience. Some agencies, like St. Paul, MN-based CPC Intersect, which offers an in-home digital platform called MyParty, are even mixing it up with not just digital recruiting but live recruiting as well.

WHAT WE SAID THEN: Though House Party’s claim to fame is intimate parties on a nationwide scale some brands still prefer their own tailor-made house party program. What works best? It depends on your brand’s objectives of course.

WHAT WE KNOW NOW: Many brands still activate intimate, highly targeted gatherings as a way to build buzz by connecting with a very specific demographic or influencer type. House Party continues to facilitate large-scale programs that can hit thousands of homes in one night. The real game changer however, seems to be Facebook, which since House Party came on the scene has begun to replace email and continues to grow as the major form of communication for millions of consumers. Facebook has also influenced redesigns for both the House Party and MyParty platforms with the mission of integrating it and other sites like it to create communities around their in-home brand experiences rather than offering isolated digital conversations. What will branded in-home events look like in 2011? Read on.

House Party 2.0
House Party launched in 2005, a year after Facebook came onto the scene, and was one-of-a-kind in the social marketing space. Though it has stayed strong since then, in the last couple of years House Party has seen a growing need to add Facebook to the mix. This year, it launched a redesigned digital platform and a more robust social marketing strategy, which includes better searching and sharing tools that allow consumers to share their experience on their personal networking sites in addition to the House Party platform. Before the new platform, once consumers were accepted to a brand’s event they weren’t able to tap into other folks’ pages. Now, they can swap information, like recipes and party ideas, eight to 12 weeks prior to the event. They can also integrate messaging so content is being posted on consumers’ Facebook pages. The information is tagged so that brands continue getting viral spread, but it’s no longer confined to one page.

House Party has also enhanced its digital tracking. “We implemented mechanisms like Gigya where we could create much better digital foot printing,” says Michael Perry, president and chief product officer, who joined House Party last year. “We could say to a client with certainty that we got 45,000 applications and opt ins for their database, 20,000 social photos, 500 videos, 12,000 blog entries and 9,000 poll answers leading up to the party. After the party, we can show for example that they had 2,000 parties and 1,800 hosts uploaded photos.”

Gigya’s social sharing tool allows users to post a photo and send it out to their whole social graph. On the backend, House Party can see how many friends that person has on Facebook or followers on Twitter, which helps them decide how each person’s social graph fits the brand’s objectives.

“We wanted to develop a product that focused on what marketers needed which was not just three hours at home but a sustained effort over time so what we created leading up to the event is an eight to 12 week marketing campaign that starts in the digital and social space,” says Perry. House Party is also working on a feature that will allow it to replicate the activity that happens on the House Party site in a Facebook tab.

MyParty
Though House Party’s numbers are impressive, some brands are interested in a more customized approach. That’s where MyParty comes in. They not only offer in-home parties but in-retailer parties as well. And in addition to recruiting hosts for the parties online they go out and hit the streets to sign up party hosts, too. For Coca-Cola’s sponsorship of the American Music Awards, for example, the brand is going to concerts with fliers and recruiting teens—Coke’s primary target for the program—to host Coca-Cola AMA-related in-home parties. During the awards show, they utilize Coke’s Twitter page by having the in-home party hosts tweet messages to the presenter on the red carpet that are then read on the air. They also do shout outs to the teen hosts during the show. And like House Party, MyParty is also turning to Facebook for even greater results moving forward.

“We’ve learned that many people don’t email anymore, especially teens. It’s all on Facebook. Since this whole platform is based on email, we have to get on Facebook to reach considerably more consumers,” says Ian Lawrow, vp-program development at CPC. “We think we’re going to get more people to opt in making it a stronger impact for the client.”

Now consumers go on the MyParty landing page, which tells them about the event, but then if they choose they can set up their party as a Facebook event. All the updates and photos will be filtered to their Facebook page.

CPC’s approach proved to be a winning combo for personalized handcrafted jewelry brand Chamilia, a 2010 Ex Award-winner. It helped Chamilia equip retailers with a Party In A Box, which included signage, branded jewelry rolls and polishing cloth premiums to create premium events. More than 276 retail events were activated with more than 28,000 people in attendance. The result was a 195 percent ROI.