The Making of a Movement - Event Marketer 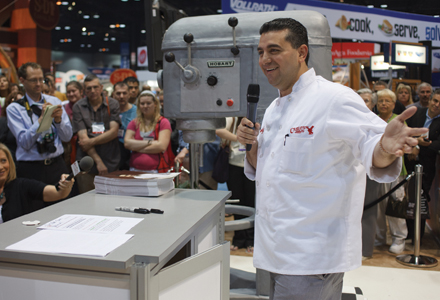 The Making of a Movement

A trade show typically is a launch pad for new products. Attendees troll the show floor seeking the latest and greatest, and exhibitors gladly oblige with displays, interactive exhibits and eye-catching graphics that tout their products’ features and benefits. But a trade show also can be a platform to unveil a marketing campaign that will endure long after the booth is packed up and the attendees go back home. The campaign may live on in the form of a contest, a website or a social community that continues to engage the target audience.

Hobart, a commercial food equipment supplier for the foodservice and grocery industries, at last year’s National Restaurant Association trade show in Chicago, launched a campaign that embodies all three. And in a tasty twist, it launched the effort  in the shape of a five-foot-tall, 600-pound custom-baked chocolate and yellow cake with silver frosting that looked just like a 1960s-era Hobart floor mixer.

For Hobart, the cake symbolized “Get Back to Scratch,” a campaign that capitalizes on the growing demand for food made the old-fashioned way, (i.e. “from scratch”), especially in restaurants, schools and grocery stores. The campaign also positions Hobart as the go-to source for mixers and other equipment required to make these healthy, tasty dishes. The centerpiece of the campaign, which will continue year-round, is a website, getbacktoscratch.com, and an online community where professional cooks and bakers can create a profile, add their business to a directory of scratch bakers, weigh in on blog posts and gain insights and tips from scratch cooks and bakers. There’s also an integrated Facebook page where they can upload photos and communicate with one another, and a Twitter feed (Cincinnati-based Gyro handles).

To raise awareness and introduce the movement, Hobart enlisted Buddy Valastro, better known as the “Cake Boss” to viewers of his reality TV show on TLC, to bake the replica of an M80 Hobart floor mixer still used in his family’s New Jersey bakery. The cake traveled more than 10 hours by truck from Hoboken to the Get Back to Scratch booth where Hobart aired a mini “Cake Boss” episode at a press conference with 20-plus media representatives and unveiled the cake before 500 attendees at a meet and greet with Valastro. Guests received an autographed picture, had their photo taken with the baker, which they could download at getbacktoscratch.com, and got to nibble on a slice of a separate sheet cake that Valastro had baked and brought to the show.

The Get Back to Scratch booth measured 20-feet by 30-feet and was located across the aisle from Hobart’s 70-foot by 40-foot exhibit space. It featured an elevated stage for “scratch chef” cooking demos, which took place on three of the show’s four days. Celebrity chef Chris Pandel, owner of The Bristol restaurant in Chicago, demoed how to prepare good, honest food and interacted with attendees. Hobart products, including one of its professional mixers, a Baxter oven and Traulson refrigerator, provided a backdrop for the scratch baking action.

“This was a departure from our typical show,” says Jenni Bair, segment marketing manager at Hobart. “We are an equipment-centric company, and trade shows are a time for our customers to see and feel our products, but we gave up booth space for Get Back to Scratch, which had minimal equipment in it. This time it was about getting this movement off the ground, getting the campaign started and getting people interested and excited about it.”

The campaign kicked off right before the show with an online contest, called the Get Back to Scratch Signature Scratch Item, which ran through August and had bakers, restaurateurs, grocers and other food service professionals enter their name into a directory and upload photos of their signature scratch-made dish. The general public voted on its favorites and three winners received Hobart mixers as prizes. At the show, attendees could sign up for the contest and directory and receive a Get Back to Scratch t-shirt. Attendees who were not eligible to enter could vote for their favorite locations or nominate an operation that was dedicated to scratch baking or cooking.

“Cake Boss” was Hobart’s first foray into the celebrity meet and greet. “The cake was cool and it brought people into the booth,” Bair says. “We realized that not everyone would be equipment purchasers, but we wanted to create excitement throughout the industry.”

Bair says she wants to grow and nurture the burgeoning community of scratch baking and culinary professionals, so the site is updated regularly to keep the momentum going. And, judging by the numbers, it’s working. The Get Back to Scratch website averages 32,000 unique monthly visitors who spend an average of three and a half minutes on the site. More than 600 establishments have registered in the directory. The movement has 550 Twitter followers, 700 Facebook “likes” and averages 30,000 monthly Facebook post views. It has also achieved more than 150 print and online mentions in trade, national and local publications, and the contest garnered more than 100,000 votes.