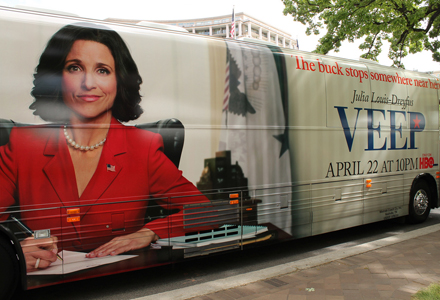 At each location, brand ambassadors dressed as Secret Service agents in black suits and stepped out of the motorcades in sunglasses and carrying iPads. They used the iPads to engage consumers for a few hours at each stop by showing them exclusive trailers for the show and handing out tune-in information. HBO also gave away stress-balls inscribed with the words “America Is My Main Squeeze.” To make sure the tour got media attention before rolling into each market HBO sent 500 bloggers and reporters in each city a special gift. It produced a limited run of commemorative plates with Dreyfus’ face on them. The individually numbered china plates and a signed letter from the character invited the influencers to the events and gave them the details on where and when the convoy would stop.

“The VEEP motorcade is a fun way to bring our new series to life and introduce viewers to the comedy with a promotion that’s perfectly in line with the show’s theme,” Zach Enterlin, svp-program advertising at HBO, told Buzz. “The combination of the over-sized ‘campaign’ bus, escort vehicles and faux secret service street teams created an engaging visual spectacle for consumers and allowed them to interact with the show and its premise.” Agency: Omelet, Culver City, CA.