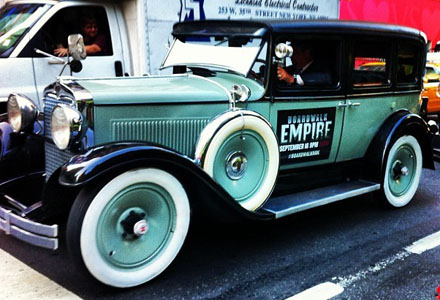 To create some excitement for the new season of its series “Boardwalk Empire,” HBO on Sept. 13 and 14 set out to bring some of the spirit of the 1920s to life in New York City with the help of mobile app provider Uber. The network deployed 10 vintage Packards, Cadillacs and Rolls-Royces all over Manhattan, picking up consumers for free rides in an effort to help them interact with the show and drive tune-in to the season three premiere. Consumers who were in the know could download the Uber app onto their smartphones and request a ride from any of the vehicles. Uber received over 2,500 requests for rides in the vintage cars and the online outreach campaign increased awareness of the promotion among bloggers with an estimated 7.9 million impressions. The brand estimated the total impressions for the social media chatter at more than 23 million.

“The promotion employed a combination of the nostalgia for the golden era of ‘Boardwalk Empire’ while using modern technology and trends to drive awareness and generate buzz,”  Zach Enterlin, svp-program advertising at HBO, told Buzz. “We wanted to give people an opportunity to experience the 1920s in a fun and practical way that felt organic to the show.” Agency: Magnetic, New York City.