Brand Sponsorships That Will Haunt You – Event Marketer 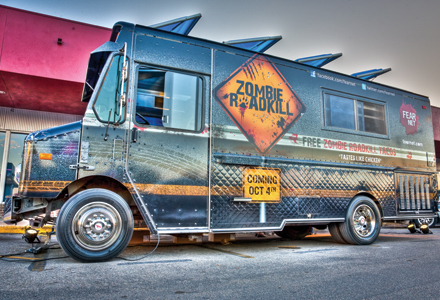 Brand Sponsorships That Will Haunt You

The Halloween season is one of the top 10 consumer spending periods in the retail space, according to the National Retail Federation, amounting to almost $5 billion last year. As we move into the spookiest time of the year, brands looking for opportunities to attract consumer dollars are exploring a series of haunting properties for attention-grabbing partnerships.

America Haunts is a network of 23 proprietary events in 17 markets that run for six to eight weeks throughout the Halloween season and touch about 1.2 million consumers who are looking for a good fright or a family-friendly good time. Along the way, several brands have joined up to enhance the experience and scare up some devilishly good results.

Last year, the CW Television Network wanted to reach a highly targeted audience nationwide to advertise and promote its “Vampire Diaries” series and its Halloween night special broadcast. To that end, the network activated for the two weeks leading up to Oct. 31 at 12 America Haunts markets and special events. The sponsorship included banners promoting the series in multiple high-traffic locations at each event and “Vampire Diaries” video promotional spots shown on video screens and video monitors in waiting rooms and lines. Meanwhile, local CW affiliates did on-site promotions with brand ambassadors doing premium giveaways and contests among the 540,000 captive consumers waiting in line to get inside the events.

Also for the 2009 season, Party City got in on the action to help promote its retail stores as the only choice for Halloween shopping. The brand activated at events in Atlanta, Chicago, Dallas and New York City to drive store traffic in each city to an audience of about of 235,000 people. The effort included discount coupon giveaways at retail sites for the Halloween events, pre-event mass media advertising in partnership with America Haunts and email and microsite marketing. Thanks to the initiatives, more than 1,700 Party City coupons were redeemed at event box offices as a result of visiting a Party City store.

For this season, the activations are still in the final planning stages, but one brand is ready for action. To promote the Oct. 4 premiere of the new web series “Zombie Roadkill,” starring Thomas Haden Church, online network FEARnet is serving up undead treats at haunted houses in five markets as part of a partnership with the America Haunts network. The series is about college kids who get attacked by the reanimated corpses of recently killed roadside animals, and all does not go well.

Through its sponsorship, FEARnet will activate a treat truck straight out of the reality show “Fear Factor.” Hungry guests waiting in line for haunted houses in Austin, Dallas, Fort Worth, Houston and Baton Rouge, LA, throughout the month of October will be able to order dishes like “Crushed Cat on the Half Shell,” and though they’ll be getting a chicken taco, the fun’s all about the gross out factor.

“We’re here to drum up excitement among these hardcore fright fans,” says Jennifer Morgan, marketing director at FEARnet. “We’ve seen that treat trucks are an effective promotional strategy and it’ll do what we want. At the end of the day it’s all about brand awareness.”

Each attendee will also get a FEARnet coaster and be asked to help the show go viral by uploading cell phone pics of the truck to the network’s Facebook wall at facebook.com/fearnet.

America Haunts believes the line to get into the event is the best place for a brand to activate with consumers because they are keyed up and excited, but looking for entertainment while they wait, sometimes for up to an hour. “Our waiting lines are prime opportunities to deliver messages, promote products and… execute product giveaways,” says Daniel Torla, president of Entertainment Resources, which handles the America Haunts events.

Plus, who knows if they’ll come out the other side alive.