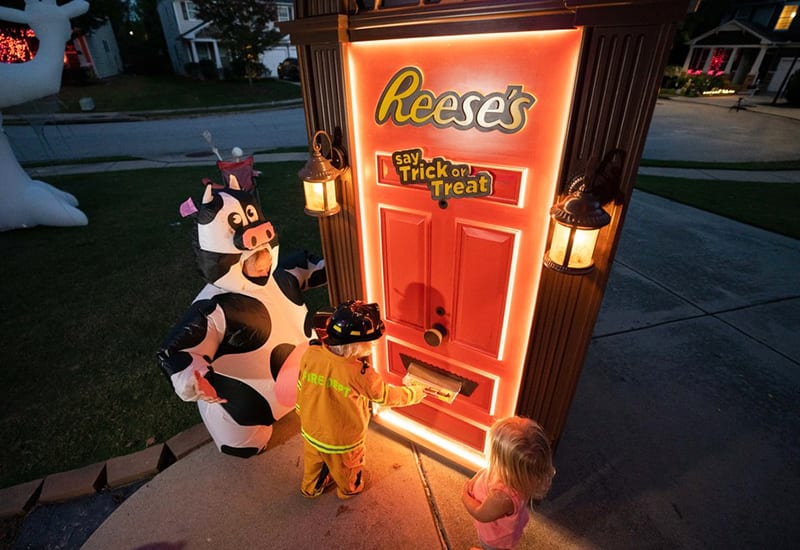 Let’s be honest: It’s been spooky season all year long. But as Halloween approached, and with trick-or-treating canceled in some areas, brands broke out their creepiest and kookiest experiential marketing campaigns to help consumers celebrate with COVID-friendly activations built for fun. Squashing beliefs that brand experiences would be canceled this year, the following nine companies delivered more than candy to mark an unprecedented Halloween season.

More From the Halloween Archives:

Renowned for its seriously clever Halloween stunts, Reese’s was at it again in 2020, this time with an experience that safely replicated trick-or-treating. Leveraging a robotic candy dispenser shaped like the doorway to a haunted house, Reese’s Peanut Butter Cups activated the Reese’s Trick-or-Treat Door experience. In select neighborhoods chosen via an Instagram call to action, the Trick-or-Treat Door rolled up to homes while pumping out smoke, lights and a Halloween soundtrack. When the robot arrived at their doorsteps, consumers were encouraged to say “trick or treat.” The door’s mail slot then opened and dispensed a king size package of Reese’s Peanut Butter Cups. To make it all happen, Reese’s enabled the nine-foot door with three motors and Bluetooth technology, and used a remote control from up to 5,000 feet away to move the machine from house to house. No social distancing required here.

With something of a hybrid approach to its Halloween festivities, Walmart delivered both a virtual camp and an array of in-person trick-or-treating experiences to mark the holiday. Halloween Camp by Walmart was a virtual series hosted by Neil Patrick Harris that gave consumers a chance to play family-friendly games, make crafts like Halloween masks and glow-in-the-dark slime and build candy-based haunted houses. On the in-person front, Walmart transformed more than 100 of its massive store parking lots into “spooky street” trick-or-treating adventures that were contactless and socially distanced. Both kids and parents were invited to dress up and participate.

Similar to the spirit of reverse trick-or-treating, e.lf. Cosmetics brought the best of its spooky holiday collection straight to influencers’ doors. From Oct. 20-22, e.l.f. hit the road with a pop-up Halloween experience housed inside a custom VW bus. The vehicle showed up at select influencer’s homes and delivered safe trial of makeup products, photo ops with a 12-foot-tall wall of hand-painted pumpkins, a personalized pumpkin patch in their front yard, and plenty of candy. By bringing Halloween to their doorsteps, e.l.f. inspired influencers to create content that celebrated the role of makeup and creativity around the holiday—and gave its brand a digital leg up (Agency: Duncan Channon). 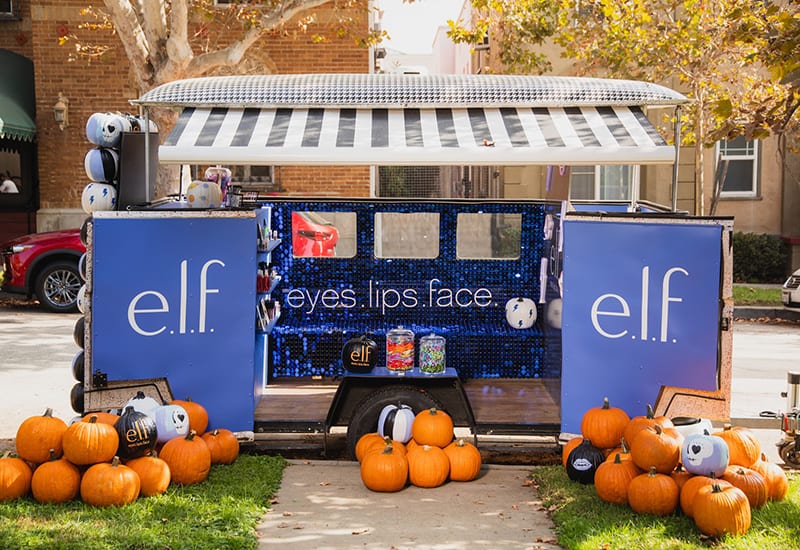 Considered royalty in both fast food and trolling, Burger King went after McDonald’s retired mascot Ronald McDonald for this Scandinavian stunt that is sure to give your pre-adolescent-self nightmares. In select Burger King restaurants in Sweden and Denmark, the brand installed voice-recognition software in the restrooms. Evoking the urban legend “Bloody Mary,” the brand encouraged consumers to say “canceled clown” into the bathroom’s smart mirror three times. Once the phrase was detected a third time, the lights dimmed, creepy noises sounded and a nightmarish version of Ronald McDonald appeared. Well played, BK. Well played.

If you’re going for creepy, a 300-year-old house is a good place to start. Such was the case for Samsung, which took over an 18th century cottage in the English village of Stevenage, Hertfordshire, and live-wired it with lights, sound effects and music—all achieved using Samsung’s SmartThings app on a Galaxy S20 phone. The brand also leveraged fog, state-of-the-art projection-mapping technology and an animatronic skeleton, and recruited makeup artists and dancers dressed in UV skeleton jumpsuits who performed in front of the building. It was all built to engage the local community (and consumers online who watched the project come together through digital content) and to showcase how Samsung’s technology can be fun and interactive. 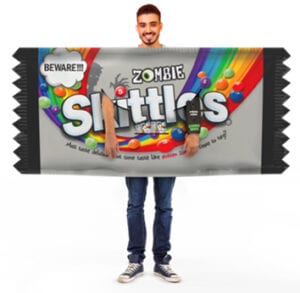 Never one to miss out on a creative branding opportunity, Skittles got in the mix this year with a Halloween costume built for the times. Yep, to encourage social distancing and promote its Zombie Skittles product, the brand developed a six-foot-wide Zombie Skittles costume that encouraged others to stay away. The costume even included a “Zombie Mode” button hidden on the wrist that, when activated, released the smell of “rotten zombie” to keep “even the creepiest ghoul” more than six feet away. To snag one, fans could head to a dedicated microsite Oct. 19-23. Winners were selected on Oct. 26 and costumes were shipped to their homes just in time for the holiday.

Many consumers indicated that the pandemic was going to impact their Halloween plans, so Mondelēz’s Sour Patch Kids brand tapped into this year’s reverse trick-or-treating trend to help families celebrate safely. On Halloween night, the brand kicked off a 12-city campaign during which it made contactless home deliveries of a special Halloween package featuring Sour Patch Kids Zombies candy and branded toilet paper to encourage wreaking TP havoc indoors. What’s more, one city was chosen to receive a visit from the brand’s “Kids” mascots who rolled through neighborhoods and made deliveries in a tricked-out jack-o’-lantern mobile unit shaped like the classic Halloween candy bucket. Now that’s riding in style. 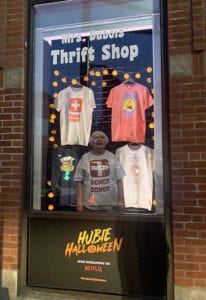 To celebrate the release of “Hubie Halloween,” Netflix developed a multi-pronged campaign built around the film. One element was a contactless Thrift Shop, aptly located in Salem, MA, that featured Hubie’s mom, Mrs. Dubois, as host and featured an array of “Hubie Halloween” merchandise to explore. Consumers could even scan the store’s windows to receive funny t-shirts featured in the film, including one that said “Boner Donor” (the line of t-shirts sold out in less than 24 hours).

In addition, influencers were sent film-themed viewing kits featuring items to interact with while they watched the premiere at home, including a smartphone projector, branded socks, a replica of Hubie’s thermos, a flashlight, candy and a collection of spooky printable activities. Influencers shared the digital at-home activities with their followers, directing them to a microsite where they could download the same activities, like a maze game, DIY costume instructions, recipe cards and BINGO. The microsite also included a virtual Thrift Shop, a “drive-in” screening room playing the film trailer and WTCH Radio streaming the movie’s catchy tune (Agency: NVE Experience Agency).

Indeed, a pandemic Halloween calls for movie night. So, to celebrate and promote the array of horror content on its platform among consumers, Hulu activated the HULUWEEN Drive-in Experience in Los Angeles—an immersive journey and a drive-in movie event. Consumers navigated their vehicles through the “Haunted Forest” pathway built out with eerie sets and living vignettes bringing many favorite horror characters to life, including Edward Scissorhands and Carrie. Multisensory effects included fog, lighting and a soundtrack synced with attendees’ in-car FM radios. There were treats, of course: Each vehicle received a “scare package” packed with candy, popcorn and hand sanitizer. To boot, Hulu offered an in-car photo activation featuring HULU’s branding before consumers were directed to park to view 4K film content on a 30-foot by 50-foot LED screen (Agency: AGENC).—R.B. 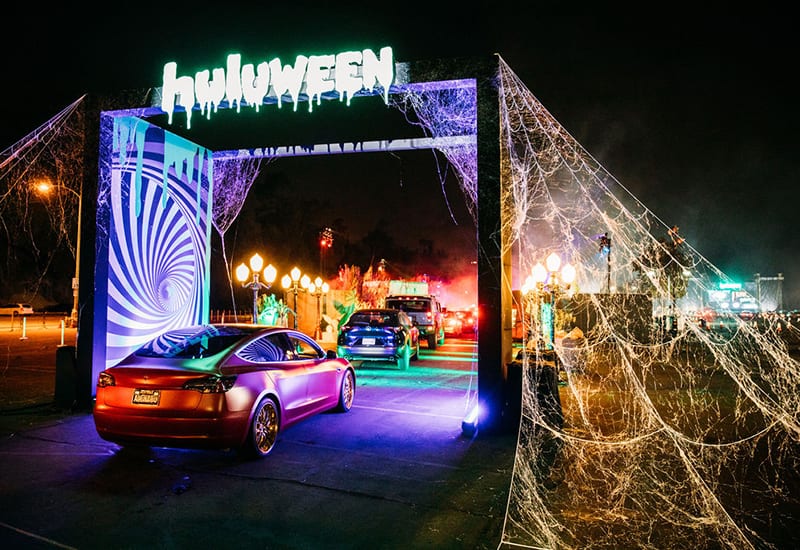