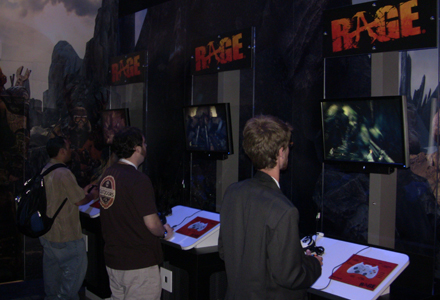 Bethesda’s exhibit created a big buzz from the outside thanks to some incredible scenery and media elements that played off the three game titles the developer focused on for E3, “Prey 2,” “Rage” and “Skyrim.” Incredibly detailed scenic reproductions of a dragon from the “Skyrim” game (he was wrapped around a big LED screen), and post-apocalypse mutants from “Rage” created a big visual impact from the exterior. At the L-shaped footprint’s main entrance, big LED display walls flanked a central stealth LED screen—all running high-energy clips from Bethesda games. (Agencies: Sparks and Purepartner by Design.)

The experience’s catch? Access to the booth was by appointment only, with a focus on international and North American press, buyers, distributers and other game developers.

Guests checked at the front desk, received a ticket and were led into a waiting/queue area, before filing into a theater space at specific times. The queue area featured reproduced artifacts from “Skyrim” game, which was profiled in the theater presentation.

The 70-person surround sound theater with rear-projection screen gave attendees a closer look at the new “Skyrim” title via a 30-minute film that ran hourly.

The theater was connected to the booth’s interior footprint via a catwalk, upon which attendees could look out onto the show floor through the stealth LED screen, or overlook the entire Bethesda exhibit footprint from above.

Attendees descended from the catwalk into the “Rage” hands-on gaming zone. The wasteland scenery of this zone played off the game’s content and theme, and introduced new characters through detailed scenic reproductions. “Rage” lends itself to cool scenery reproductions, and designers took advantage creating vehicles, mutants and characters plucked right from the game’s world and putting them on the show floor.

A custom built acrylic orb hung over the entryway to the “Prey 2” zone, which leveraged some creative projection technology to pull off a killer visual effect. A screen was mounted inside the acrylic orb, and a projector shot moving images onto the screen to recreate the “capture” effect of a character trapped in futuristic bonds (a central theme of the game). The result was an image of a character that appeared to be wrapped in moving electric bonds inside the suspended acrylic structure.

“Prey” trailers were screened in two semi-private screening areas; baffled theaters that could be run concurrently to maximize traffic throughput. The graphics on the walls were from concept art from the game itself.

At the rear of the footprint, private meeting rooms were housed in a two-floor deck structure (bout 25-percent of the exhibit space was dedicated to meeting rooms). Underneath the deck were five meeting rooms and two interview rooms, used by Bethesda sales teams and for podcasting and media Q&A’s.
Upstairs, the “Prey” graphics on the exterior of the deck structure wrapped up over the upper level windows, providing an extra layer of exclusivity for the executive rooms for Bethesda brass on the top deck. Additional graphics up on the walls and flowers created the upscale décor, and a VIP hospitality bar completed the picture.