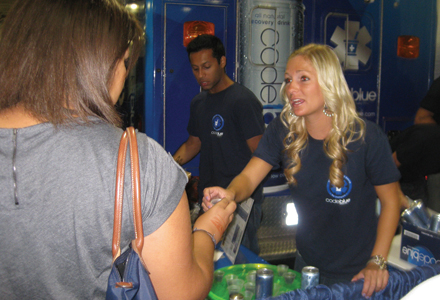 As the lazy days of summer wound down and hints of autumn filled the air, it was back-to-school shopping season for parents and kids once again. It was also a sales opportunity that companies couldn’t afford to miss. Making meaningful connections with consumers during this period can make a brand stand out and influence what families put inside their shopping carts. Who made the grade this year? We bring you highlights:

Code Blue. Recovery drink Code Blue returned to CollegeFest for a second year to reconnect with college students in the Boston area, a major market for the brand. “We’re doing really well in college markets so that’s why CollegeFest is a perfect opportunity for us to introduce the brand to incoming freshman,” says Jeff Frumin, ceo and co-founder of Code Blue. “CollegeFest is the perfect venue and place to reach students from multiple schools.”

The brand set up its Code Blue Recovery ambulance, equipped with coolers for street sampling throughout the year, as the backdrop for its on-site experience. Students played a spin the wheel game for prizes like the Recovery Kit, which included a branded t-shirt, hat and product sample. For data collection, brand ambassadors were on-hand with iPads to take pictures of students in front of the ambulance and then upload them to Facebook. Students could comment and share their photos with friends on the spot. They also had the opportunity to sign up to be a Code Blue brand ambassador on their campus.

“Last year we did CollegeFest and it was a huge success,” adds Frumin. “We got more than 200 students who were interested in getting involved on their campuses.”

Ford. The only brand visible on the outside of the Convention Center, Ford offered students and first-time car-buyers a chance to drive its new 2011 Ford Fiesta. Students who got behind the wheel received tickets to CollegeFest for themselves and any friends that rode with them in the back seat. Drivers were asked to enter their information on an iPad for a chance to win a car. They could also opt to fill out a reply card to be contacted by a local dealer. Inside the venue, Ford set up a 20-foot by 20-foot area with a stationery vehicle that students could take their time checking out as well as enter the sweepstakes on additional iPads.
“CollegeFest is a great event for Ford Fiesta to interact with college students. This was our second year sponsoring CollegeFest and each time we’ve had quality interactions with interested students who are seeking information for their impending first car purchase,” says Amy Green, sales and marketing specialist-east market area at Ford Lincoln Mercury Sales Operations.

Virgin Mobile. Two weeks prior to the event, CollegeFest street teams pounded the pavement to intercept students on behalf of Virgin Mobile. They handed two students at a time Virgin Mobile Kyocera Loft phones and challenged them to type in a one-line text; the quickest won a ticket to CollegeFest. On event day, students could engage in additional texting contests at the Virgin Mobile booth to win prizes, as well as take pictures and have their own photo Flip Book created on-site. Each day Virgin Mobile also gave away 10 meet-and-greets with featured musicians.

“We are really excited to be one of the brands that participated in Boston’s CollegeFest this year,” says Lyndsay Bartlett, local marketing manager at Sprint Prepaid Group. “Throughout the week, Virgin Mobile engaged students through various activities like texting contests for an opportunity to win cool prizes like a trip to the Virgin Mobile FreeFest [later that month], while also learning about Virgin Mobile’s Beyond Talk plans.”

Brita
This fall, water filter brand Brita handed out reusable water bottles and coupons to drive students at eight college campuses to local stores to purchase one of its signature water pitchers. The program kicked off on Aug. 20 and ran through September at the Evergreen State College in Olympia, WA, George Washington University in Washington D.C., Gonzaga University in Spokane, WA, Pennsylvania State University, University of Arkansas-Fayetteville, University of California-Berkeley, Washington University in St. Louis and Wesleyan University in Middletown, CT. The on-the-ground efforts were an extension of the three-year Filter for Good (filterforgood.com) online campaign, which includes an eco-challenge grant program that asks students for their ideas on how to make their campuses more sustainable. Brita funds the winning idea.

The coupons will help the brand track sales as well as how many students are pledging online to reduce water bottle waste. It also opens up a line of communication between Brita and students who provide their contact information when they sign up for the eco-challenge grant program.

“We’re handing out reusable water bottles along with an offer for students to save on their very own Brita pitcher, so that from their first day on campus they can start filtering their water,” says Sara Perelli-Minetti, associate consumer promotion manager at the Clorox Company, which owns the brand.

Shop Til You Rock
To promote its retailers’ fall collections, mall company General Growth Properties hired New York City-based Grand Central Marketing to help them combine fashion and music to lure in teens to its nearly 200 malls. It partnered with the Disney Channel, singer Demi Lovato and a number of brands to put together a tour that traveled to 120 GGP malls in 39 states from July to August. Lovato kicked off the tour with a concert at the Glendale Galleria in Glendale, CA. Other bands followed throughout the duration of the tour. Retailers like Hot Topic (which sponsored all of the bands), and brands like Kodak, Ubisoft and Pepsi jumped right in.

Ubisoft. The video game company Ubisoft put its latest Just Dance game (it’s like Rock Band meets Dance, Dance, Revolution) in the hands of its primary target at its booth. Teens had a chance to test out the game as their friends cheered them on. Those who became a fan of the game on the Just Dance Facebook page on-site received an “I ♥ Just Dance” t-shirt. “Shop Til You Rock provided fantastic alignment with brands and recording artists who have tremendous relevance to a core Just Dance demographic,” says Carrie Feigel, brand manager at Ubisoft. “The tie to music and pop culture was a perfect fit for the Just Dance brand and meeting teens at their favorite weekend destination—the mall—really drove high attendance and prolonged engagement with our game. A massive number of teens tried the game.”

Kodak. At Kodak’s Rock On Salon teens had their hair done like a rocker and donned props (guitars, jewelry, hats and sunglasses) for a photo or video using the brand’s camera that does both. Brand ambassadors helped teens pick out a wild hair color using Hot Topic’s Color Fiend brand of hair sprays in colors like white, pink and glitter. Once the teens were all done up they had their photos taken in front of a step and repeat. The photo was uploaded onto the Shop Til You Rock website and teens received a coded card to retrieve, customize and share it with friends online after entering some personal data; they could also retrieve the videos online. Attendees also received a coupon for in-store purchases and had the opportunity to join GGP’s loyalty club.

Pepsi. The Pepsi Refresh Everything Lounge was also on-site creating awareness for refresheverything.com, which gives away millions of dollars to fund consumer-driven ideas. To educate teens about the program, Pepsi offered up laptops where teens could vote for the proposed projects. Attendees could vote on their mobile devices as well. The lounge also offered teens a chance to chill on beanbags, listen to music and walk away with a Shop Til You Rock tattoo applied by a brand ambassador.

Make-A-Messterpiece
The creative art studio Make-A-Messterpiece, the brainchild of Manchester, NH-based Gigunda Group and Bounty, has become such a hit with Chicago-area kids that this fall the brand took the idea on tour. The initiative celebrates the winners of the Bounty Make a Clean Difference contest which awarded one American school a $25,000 celebrity-designed classroom makeover. The tour kicked off on Sept. 14 at the winning school, the John F. Kennedy Elementary School in Wayne, NJ, and will visit the other 10 finalist schools through Oct. 14 to award them each with $5,000 towards their art programs.

The tour travels in a hot pink retrofitted school bus and features three of the studio’s most popular interactives—Drum Roll, Bubble’ology and Splat’tacular Tables. Manned by “Mess Masters,” the experience extends around the vehicle with five Splat’tacular Art Tables and a bubble blower shaded by a pink and white awning that unfolds from the vehicle. The children are equipped with all sorts of artistic tools, like paintbrushes, glitter and construction paper to create their messterpieces. After the fun, children clean up their messes at a Bounty Clean-Up station.