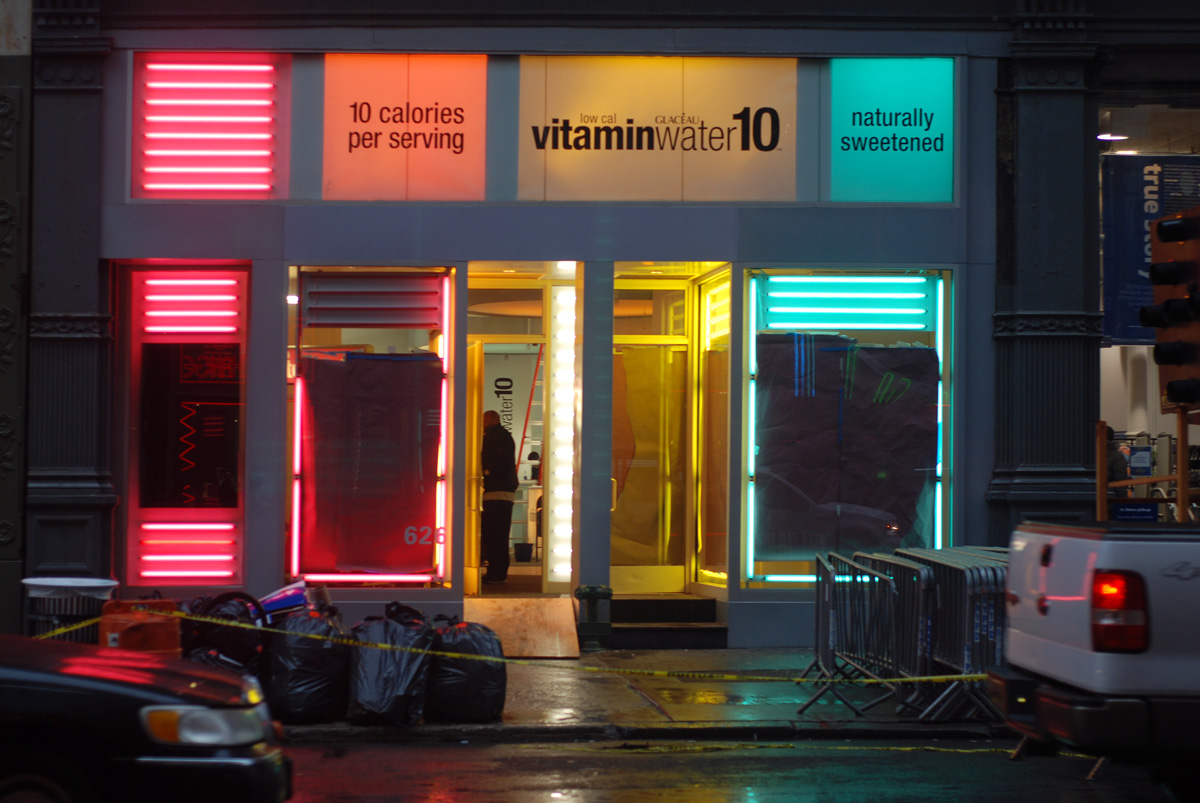 Glacéau Pops Up in Manhattan

Fry an egg dance a jig or get jiggy with it. It’s easy to burn 10 calories and Glacéau splashed that message all over New York City during its launch of vitaminwater10 last month with pop-ups in Union Square and SoHo. Since New York is home base for the brand launching its newest product there was a natural fit says Eric Berniker senior vp-marketing at Vitaminwater. “New York is where we launched this company it’s where we’re based and it’s our biggest market ” he explains.

On April 2 celebrity personal trainer Ramona Braganza and “ER” hunk Shane West were on site in Union Square to promote the vitaminwater10 gym. Consumers sampled one of four new flavors (xxx, essential, multi-v, and energy) then worked off the 10-calorie drink with Braganza and West. In addition to samples of the naturally sweetened beverage the pop-up gym offered attendees opportunities to shed 10 calories on exercise bikes yoga balls and by playing rock paper scissors. Participants also could try to unlock a gym locker for a chance to win $10 000 a membership to the New York Health & Racquet Club or a year’s supply of vitaminwater10.

“This event was about one thing: highlighting the fact that calorie-conscious consumers no longer have to choose between calories and taste ” Berniker says. “A successful event is more than just a wacky stunt or a place to give out free samples. For us it has to combine humor with a statement about the brand and there’s no doubt that everyone who came by the event walked away knowing that our new vitaminwater10 has only 10 calories per serving” (Agency: LeadDog Marketing Group New York City).

In SoHo from April 2 to 12 Glacéau activated a pop-up storefront and decked it out like the trendiest club in Amsterdam complete with a kissing booth and window girls showing passersby how easy it is to shed their 10 calories by singing or checking email.

Heading toward the glowing light wall at the back which drew thirsty samplers toward the bar people paused at the essential flavor station decked out in electric orange with a quiet sitting area sofa and chairs for chillin’ and sippin’ which was especially nice on the several rainy days of the pop-up’s 10-day run.

In the energy flavor area people got moving at a Nintendo Wii gaming station stocked with tennis bowling and baseball games. Almost everyone who walked through stopped to play or watch. Not coincidentally the same area housed the data collection center where brand ambassadors recorded demographic data and asked consumers to compare v10 to other Glacéau products share taste highlights and talk about which competitors’ products they drink. Surveys finished up with the all-important “What are the chances you would purchase vitaminwater10 in the future?” question. At the end of each day staffers talked about their impressions and recounted memorable positive and negative moments from the activation all of which was also recorded.

The multi-v area was a cross between the game room in your college buddy’s basement and the local trendy coffee shop. Here guests enjoyed the foosball table or the free-to-use wi-fi enabled laptop station. At the back in an area reminiscent of a pub in old Amsterdam guests hit the bar and chatted with the bartender about the water.

Though getting samples out there was the goal for both pop-ups they had the ancillary benefit of building the brand’s cool hip image. “We hit every core demographic getting the name out there and getting people to sample it ” says Aduora Ugokwe event coordinator at Glacéau. “We wanted to do something different and this is one of the best ways to reach our target consumers.”

And they did. Berniker says the primary goal of the launch was to “highlight the fact that calorie-conscious consumers no longer have to choose between calories and taste.” On launch day at the gym over 23 000 people came by to sample a bottle of vitaminwater10. “It’s still early but we’re very excited about vitaminwater10 and its potential to bring new users to the vitaminwater franchise ” he says. Sounds delicious.