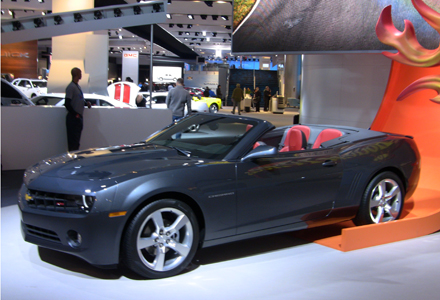 For last week’s Chicago Auto Show, held Feb. 11 to 20 at McCormick Place, General Motors set its sights not just on auto hounds from around the Windy City, but all over the world by deploying a new and innovative 360-degree photo activation at its exhibit. The activity was set up to promote the new convertible Camaro and used 27 cameras, mounted in a sweeping, ascending curve around one side of the car. Attendees jumped, leaped and kicked their legs in the air “Matrix”-style as a photographer took 27 individual stills with one click. The resulting action shot was saved as a stop-motion .gif image. Touch screen stations positioned all around the perimeter enabled participants to send the image to social media platforms like Facebook and Twitter and personal email accounts.

Though the brand is still crunching the final numbers, preliminary metrics indicate that attendees took more than 4,000 pictures, which have netted more than 70,000 impressions online, just from the Chicago show. Across all shows this season there have been 15,000 photos and more than 200,000 impressions.

“We tried to make our auto show display more consumer-friendly, intuitive and relevant to give the people what they want,” Steve Rosenblum, marketing and advertising director at General Motors, told Buzz. “So much of the time, brands are pushing a message out there. With this, [consumers] want to do it, so they put the images out there  and pass the message for us.” Agency: Jack Morton Worldwide, Chicago; Technology: 24G.