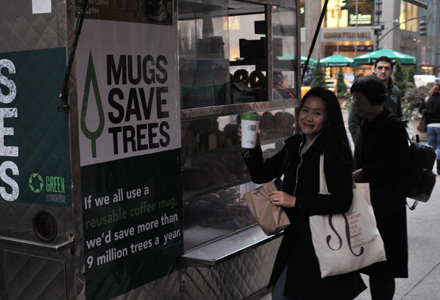 NBC kicked off the 2012 leg of its Free Fruit Fridays program in Brooklyn on Jan. 6 by handing out fresh fruit to passersby from a branded Sprinter van. The effort is part of the network’s Go Healthy New York campaign that is visiting one of the five boroughs every Friday through February. Next stops include Queens on Jan. 13 and Manhattan on Jan. 20.

At the events, the van parks outside hot spots like Rockefeller Center, Prospect Park, Park Slope and Grand Central Terminal around lunchtime to distribute fruit and encourage a healthier lifestyle. The NBC team wears branded uniforms, and in addition to the fruit hands out healthy lifestyle literature that drives consumers to NBC’s website for health tips and more information on the national campaign. The team also hands out coupons provided by campaign sponsors such as Whole Foods, Seamless food service and Cabot Cheese.

“As a station and organization we look at the community every day and what touches people’s lives and we knew how healthcare is top of mind for everyone in the marketplace,” Robert Harnaga, vp-sales NBC NY, told Buzz. “When you’re asking the community to really look at themselves and to get healthier there’s no better way to do it than to give them that first step, and that first step could be as simple as eating something healthy right now.”

GE Healthcare, a founding sponsor of the campaign, is also getting on board by stationing its new chair-based MRI scanner (called the Optima MR430) near the fruit van to encourage consumers to ask their doctors about the machine. Consumers can follow the program on Facebook, Twitter and Foursquare where the network divulges clues about its next stops a week prior to the events. Agency: Encompass Media Group, New York City.