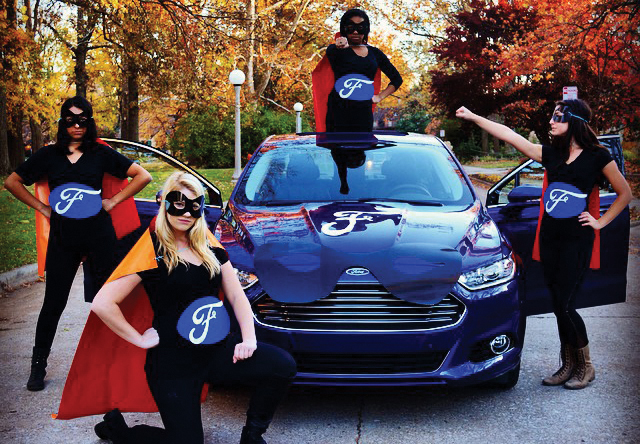 Ford’s tagline is Go Further, and that’s just what the students who competed in the Ford College Ambassador Challenge do. The program, which launched in 2012, last year ran its third flight from September through December. And once again, teams of four students, this time from nine colleges, each equipped with a Ford Fusion and all the creativity and social savvy they could muster, vied for the grand prize—a trip to Ford’s Dearborn, MI, headquarters for networking, a crack at an internship and maybe even a job, not to mention a $500 prize.

“When you look at some of the big passions of people at this stage of life—music, sports, fashion—we decided to go with career, because that is a very relevant theme when you are in college,” says Amy Green, marketing development specialist at Ford. “We wanted to be a resource in that conversation.”

A microsite, fordcollegechallenge.com, which was built by Iced Media in New York City, holds the whole program together, serving as a resource and hub that broadcasts digital content and social interactions created by the challenge, but also as an educational tool. It functioned initially as a clearinghouse for the students who applied from campuses around the country, posting their resumes and relating in 140 characters or less why they should be the college ambassador on their campus. Ford partner Lauren Berger, also known as the Intern Queen, reached out to her network of colleges and career centers to generate interest, and last year, the company tapped Vine influencer Josh Pack to help spread the word.

Once chosen, each team received a page on the microsite where they posted digital content like photos and videos and updates on their challenges and encouraged friends and family to vote and tweet for them. Their first challenge: to create a six-second Vine video illustrating a day in the life of a college student and how they incorporate Ford into their activities. The second: To plan and host an on-campus workshop, Drive Your Career, in which Berger shared tips on how to gain an internship and get started in the workplace. Students used the microsite to RSVP. Ford’s recruiting team visited the campuses to answer questions about working at Ford and career questions in general.

The third challenge was a social scavenger search in which, instead of picking up items around town, students fulfilled prompts such as “Show us how the Ford Fusion is a perfect vehicle for making timeless memories,” or “Deck your team out in prize-worthy Halloween costumes and use your vehicle as a backdrop,” then tweeted out their photos. A Ford Challenge Tweetometer on the microsite measured which team shared the most photos and generated the most buzz.

“The students definitely cultivated their online community through the challenges,” Green says. “In the beginning they had some vocal fans that re-tweeted and reposted and liked on their behalf, but as time went on, the students were able to grow their networks through the challenges. By the end, we saw that the shares of the teams’ social communities outweighed the team sharing. It was interesting to see their level of engagement and how they were able to connect with the online community and the offline community.”

Besides serving as a measuring tool, the microsite broadcasts career pointers in the form of a blog and, in partnership with online publisher Thought Catalogue, features  interactive quizzes around college and career advancement. Among the most popular—quizzes to determine your “power outfit” and your “work ride.” The answers relate to five vehicles in the Ford fleet geared toward first-time buyers like college students or recent graduates. For the adventurous type, for example, there is the Ford Escape; for the smarty pants, the Fusion, with its Sync technology and Active Park Assist feature. Once they completed the quizzes, users could share their results, and often stayed on the site to interact with other areas.

“We knew some people weren’t going to be able to go to an on-campus event or be a part of the social scavenger searches, so this was a way to bring some of the fun and experience of the campaign to them,” Green says.

In the end, the team from the University of Illinois won the big prize, but in a sense, everyone was a winner. “The students embraced the challenge as an opportunity to apply their learnings to the classroom and in interviews,” Green says.

But Ford comes out on top, too.

“Not only do we enjoy seeing users kind of make our product their own, we also learn a lot from them in the process, like what is relevant to them and what technologies they are using, like Snapchat and Instagram, that we can incorporate into the challenges,” Green says.

This last year, applications to participate in the challenge increased by six or seven times over the previous year, and organic sharing skyrocketed, up nine times over the prior program. “That was due in large part to the evolution of the program and how we were able to put a car in the hands of the students and evolve the challenges to better relate to how they interact with the world. They saw that as something that would just be fun to participate in,” Green says.

And go further with.