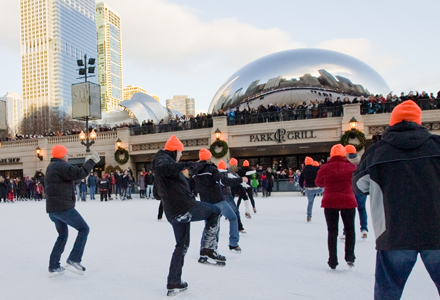 They had done it all—scavenger hunts, trust exercises, walking on fire—you name it. But this year, the Chicago-based financial services company Infinium Capital Management made their traders perform a choreographed dance in public at Millennium Park’s skating rink on Jan. 8. The stunt was part of the company’s Vision Night 2011, which is its official kick off to the New Year.

To get the company excited about this year’s team building exercise, a letter from Infinium’s ceo went out announcing that this year the exercise was totally different. A month before the event, the announcement was made official and rehearsing got underway. Employees had about six days to do their own training using an instructional tape. On the morning of the event, they trained with 20 professional instructors for three and a half hours to make sure everything went smoothly. In addition to the 250 employees, the company also hired 25 skaters to do the dance routine on the ice rink and recruited several more random participants through social media outreach.

The team, which was transported from the company to the park on buses, was instructed to wear regular clothes to blend in with people at the park. Their cue to get to their positions was the song “Sweet Home Chicago,” which was followed up by an energizing montage of beats including Queen’s “We Will Rock You” and EMINEM’s “Lose Yourself.” Once the music came on, they all put on orange stocking caps and got their groove on. Three employees took it up a notch and surprised their team by dressing in orange spandex from head to toe, reminiscent of the “Green Man” from the FX show “It’s Always Sunny in Philadelphia.”

“My philosophy is, if you can get them to do this kind of stuff, and they trust us in these kinds of things, they’re going to be able to trust us in the bigger things, and so we won the right to be heard and that was the goal,” Hugh “Mac” McNally, chief strategy officer at Infinium, told Buzz. Agency: One Smooth Stone, Downers Grove, IL.