Behind the Scenes as a Volunteer at the Travelers Championship 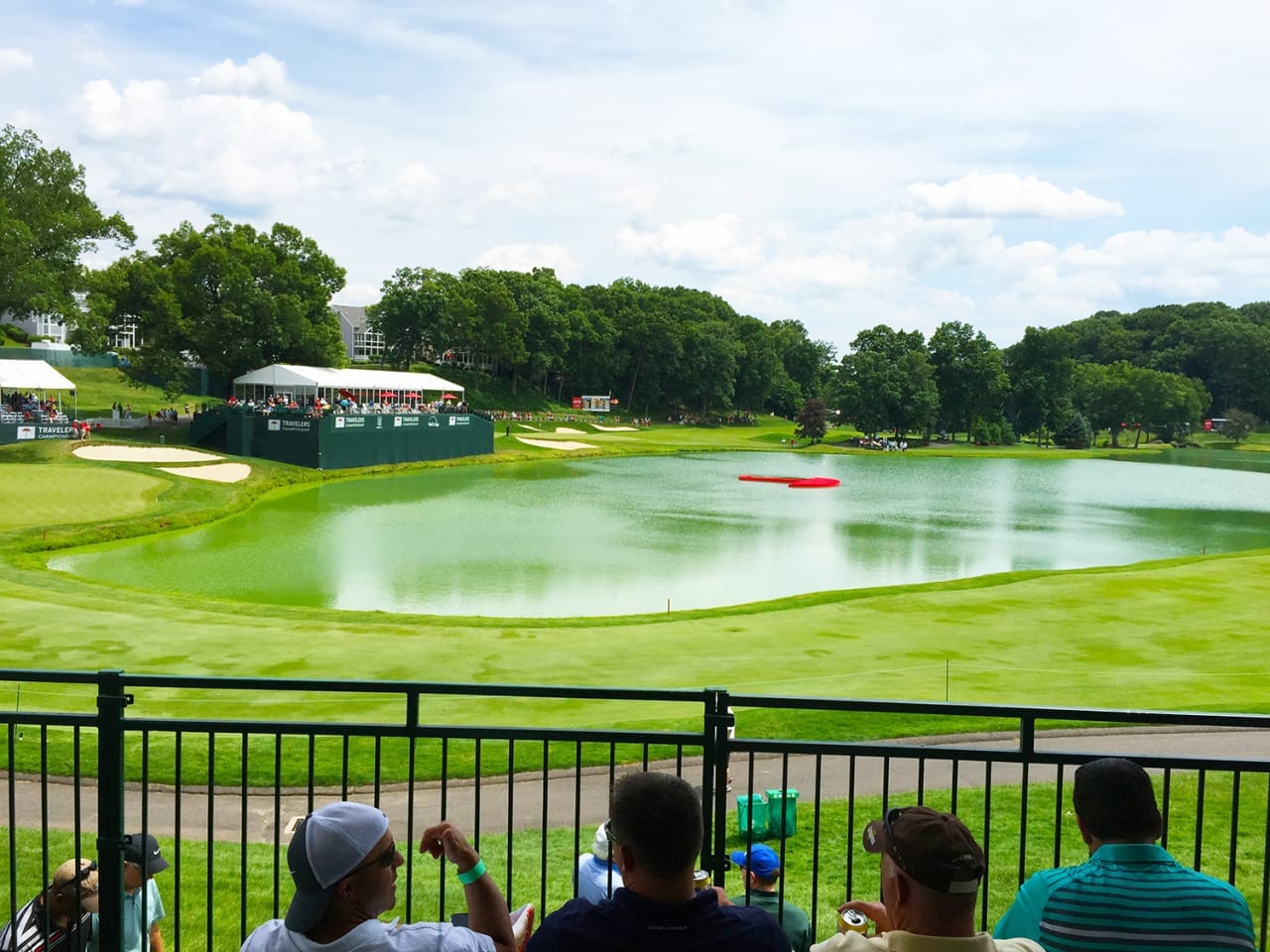 Behind the Scenes at the Travelers Championship 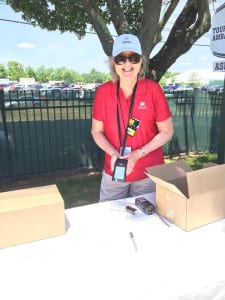 OK, I’ll admit it. When I signed on earlier this summer to volunteer at the Travelers Championship in Cromwell, CT, I didn’t quite know what I was in for. Anyone ages 16 and older can take part in more than 20 volunteer opportunities, and the golf tournament relies on more than 4,000 volunteers who serve in all types of roles as amateur caddies, corporate hospitality and player logistics. Some even get to help with scoring or hold those annoying “QUIET, PLEASE” signs as part of the gallery control. Corporations, community groups and individuals all sign up.

My duties were not so glamorous as any of that, but I had one heck of a day out there at the lush TPC River Highlands, where the event takes place in the rolling hills outside of Hartford.

First off, I hooked up with tournament coordinator Josh Belowich who made sure I received my red Travelers Championship golf shirt and Championship cap, so I would look like one of the official volunteers. The real volunteers also received a weekly grounds admission badge, parking pass, complimentary meal for each shift worked, a Hartford Health Care water bottle and other giveaways. The biggest perk—an invitation to the Volunteer Appreciation Party on Saturday of tournament week.

I was surprised to learn that all this doesn’t come free, however. Volunteers cough up a hefty $40 for the honor of working a minimum of two five- to six-hour shifts throughout the week. It’s a worthy investment, though. The proceeds cover the cost of their shirt plus their food, and thanks to their efforts, and moolah, the tournament is able to donate 100 percent of its net proceeds to more than 100 charities throughout New England, a total of more than $32 million since 1952. 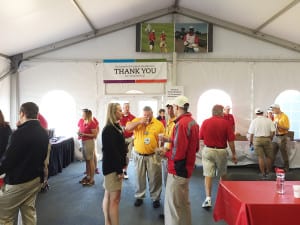 The scene at the Volunteer Villa.

After orientation in the volunteer villa, which was actually a huge, white tent where the volunteers were filling up on breakfast and other goodies, we took off in a golf cart for a spin behind the other tents, trucks and fencing spread across the lawns. As we drove past the TV compound, corporate chalets and fan zone, Belowich explained how the entire set up began a month earlier with a single trailer, then gets busier each day with more commotion and more movement. “One of the beauties of a PGA Tour event is we break it down and start from scratch each year,” he said. He discussed the three pillars of the tournament—branding (that explains the ubiquitous Travelers’ red umbrellas!), fun and charity. My role as a volunteer for the day was to focus on the fun part.

My first job was as greeter to the steady stream of attendees who approached the admissions gate. So I, along with a very nice high school student, who also was volunteering that day, took our positions at a remote outpost near the parking lot where we welcomed each guest to the Travelers Championships and wished them a nice day as they advanced toward the entrance gate. Simple enough. And I learned one thing that every Walmart greeter must already know, that simply by saying hello and “Welcome to Travelers,” or “Walmart,” as the case may be, you can literally effect a change over peoples’ faces. They really did brighten up. Most returned my greeting with a smile as they hurried along the path.

After about 45 minutes of this, I got promoted to the gate by the ninth hole where, along with about six other volunteers, I checked and scanned badges of the volunteers and tickets of the guests coming through. As the crowd thickened, we often had to rip off the ticket stub and scan it later, so as not to hold up the traffic flow. It really was kind of tricky, getting that scanner to read the code on the attendees’ tickets, along with handing out pairing guides and answering questions, and sending those we couldn’t handle onto more experienced tournament ambassadors.

Bubba Watson may have won the tournament, but I feel like I was a winner, too. I came away from the day exhausted and with a deeper appreciation for what all volunteers, brand ambassadors and event staffers do on a daily basis. And what’s not to love about spending a beautiful summer’s day on a rolling green golf course in a cute red shirt, meeting and greeting people who are out for a day of fun and relaxation. I’ll volunteer for that any day.

Related links:
• On Assignment: EM Editors Go Behind the Scenes