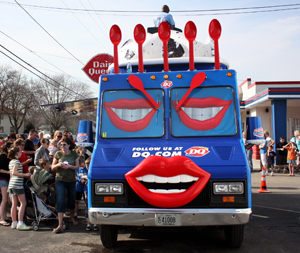 Dairy Queen is celebrating the 25th anniversary of its iconic Blizzard treat by taking a custom-designed Blizzardmobile to cities in 25 markets in the U.S. and Canada where through Aug. 13 it will distribute more than 75,000 free new Mini Blizzards. The Mini Blizzard, which is about half the size of a small 12-ounce Blizzard and will be available in DQ restaurants beginning Aug. 1, is the focal point of an integrated effort that also includes TV ads, online photo and video contests promoted on Facebook and new Blizzard flavors like Ooey Gooey Caramel Brownie. A tie-in with DQ’s ongoing support for Children’s Miracle Network of hospitals hopes to raise $1,000 in contributions per market.

Oreo, which is the top-selling Blizzard flavor, is a major sponsor of the tour, along with other popular flavors including Butterfinger, Heath and Reese’s.

Shaped like DQ’s 25th anniversary birthday cup topped with an Oreo Blizzard, the Blizzardmobile is bright blue with red spoons on its truck cab and serving as windshield wipers. Upside down Blizzard cups have replaced the side mirrors. Red lips, a staple of Dairy Queen’s TV commercials, adorn the front, side and rear of the truck. The side panels open into the truck’s interior where more than 2,000 Blizzard samples are served in each city.

The Blizzardmobile makes three stops within each market: a larger venue such as a volleyball tournament or minor league baseball park, a DQ store in each market that is determined by Blizzard fan club members’ votes and a local Children’s Miracle Network Hospital.

The full event experience, which takes place at larger venues for two hours, includes an emcee who interacts with the crowd, music, photo opportunities, free Mini Blizzards and the “Blizzard Blaster,” a giant, upside-down inflatable Blizzard cup filled with chilled, swirling center air where attendees in goggles and arctic mittens fashioned with oversized spoons for 25 seconds to try and grab coupons amid swirling confetti for prizes.

“We want everyone to know the Blizzard is turning 25, and also let people know that beginning Aug. 1 they can get these Mini Blizzards at their Dairy Queen stores,” Michael Keller, chief brand officer at International Dairy Queen, told Buzz. “We’ve already got 2.5 million Blizzard Fan Club members and our Blizzardmobile tour is simply another opportunity to spread the word, generate fun and enthusiasm for the brand and raise funds for Children’s Miracle Network all at the same time.” Agency: GMR Marketing, Milwaukee.