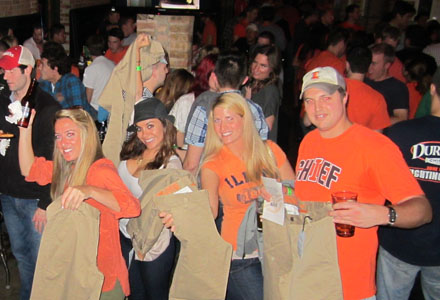 To generate trial of its new Alpha Khaki pants, Dockers on Sept. 17 held an Alpha Fan bar crawl that dared guys to “drop trou” to win a free pair and be entered for a chance to win a grand prize. The events took place at three bars in five cities—Chicago, Los Angeles, Miami, New York and San Francisco.

Dockers sent brand ambassadors into each bar to ask guys—or girls—to drop their pants and answer trivia questions for a free pair of Alphas, a new style of khakis with the rugged look of blue jeans and made with a slim fit, lower rise and heavier-weight fabric. Those who participated were entered to win an Ultimate Home Entertainment package consisting of a 60-inch flat-screen TV, surround-sound system, La-Z-Boy recliners and a mini-fridge. Games and free temporary tattoos added to the experience, and radio vans were onsite in at least one location per market. Anyone who purchased a pair of Alpha khakis at participating Macy’s stores in those markets received a $50 Live Nation voucher.

To generate word-of-mouth, participants who tweeted “Dockers just made me an Alpha Fan at [bar name] #dockersalphafan,” earned a second entry into the sweeps. If a friend retweeted the message, they received a third entry. A partnership with rundown.com, a free daily email about local happenings, and a Dockers Facebook page also promoted the effort.

“There is no better way to change perceptions than to have men actually wear this new product,” Jen Sey, svp-global marketing at Dockers, told Buzz. “We felt it was important to go to the places where men are, in environments where they are having fun—watching sports—to make it easy and relevant for them to interact with our brand. Showing up in unexpected ways where our consumers are makes connecting with them one step easier.” Agency: Grow Marketing, San Francisco.