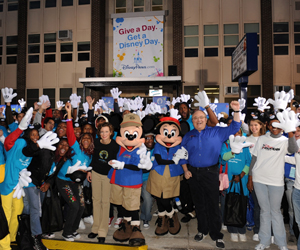 Disney Gives Back to Generous Consumers

In order to build buzz around its Give a Day, Get a Disney Day program, in which volunteers who spent eight hours working in their communities receive a free day at a Disney park, the iconic family brand took to the country’s highways to “drum up” some support.

The tour traveled in a custom-wrapped Sprinter van, though some of the talent traveled courtesy of program partner Southwest Airlines. It made stops in 25 markets nationwide from September through March. Each stop was a two-day affair. On day one, the Sprinter, loaded with Disney’s Jammitors performance troupe, stopped at public spots all over the target city, guerrilla-style. The Jammitors, who were dressed like construction workers or painters, hopped out of the van and created music and dance using their tools (broomsticks and trashcan lids, and the like) to drum up interested crowds. A street team of brand ambassadors circulated through the crowds and handed out information, drove people to the program’s website to sign up to volunteer and answered questions during the show. On day two, the work began on an officially sanctioned family friendly project, cleaning up a city park, for instance, with the help of Mickey and Minnie Mouse, of course. Volunteerism partner the HandsOn Network advised Disney on which programs to sanction. Pre-event, some volunteers were invited to join the crew so that each workday would have enough hands on deck. The Give a Day program facilitated more than one million volunteers and eight million man-hours of work during its run.

“We wanted to promote family volunteerism, with an emphasis on family units coming together to help their communities,” Alex Ruiz, promotions manager at Disney, told Buzz. “We wanted to create a new opportunity for our guests to interact with us on a deeper level and do some good while giving them a day at a Disney Park.” Agency: Pro Motion, St Louis.