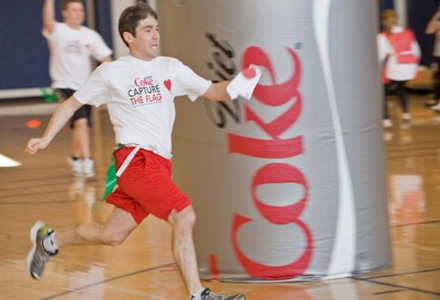 Two teams of UCLA students went head-to-head in a game of capture the flag where the goal wasn’t only to get the most flags, but to get the most dollars for heart health, thanks to Diet Coke and its support of the National Heart, Lung, and Blood Institute’s The Heart Truth campaign. The game on Feb. 1 in Los Angeles was the first in a series of seven more games planned for Atlanta, Austin, Boston, Chicago, Columbus, OH, Seattle, and Washington D.C., in which each team plays for a heart healthy charity. In L.A. it was between the UCLA Preventative Cardiology Program and the University of California, Davis Women’s Cardiovascular Medicine Program. The winner of each game gets a $40,000 donation for their charity of choice and second place team gets $20,000, courtesy of Diet Coke. In the grandstands at the game were invited media, UCLA students and faculty and a gallery of stars, including Heidi Klum, spokesperson for The Heart Truth campaign.

For the internet audience, Diet Coke has created an online game of capture the flag at dietcoke.com/hearttruth. Throughout February, American Heart Month, they can capture virtual flags with a click of the mouse to trigger a donation from Diet Coke to heart health programs funded by the Foundation for the National Institutes of Health up to a grand total of $100,000.

“Bringing this message to our consumers is great for the brand and our consumers think it’s great for us to be a part of this,” Kerri Kopp, brand manager for Diet Coke at Coca-Cola North America, told Buzz. “The idea of capture the flag is a marketing strategy that tells this story in a way that is consistent with our brand.”