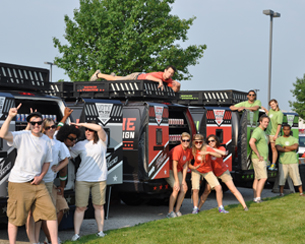 The campaign invited consumers to participate in all areas of product development— including color, name, flavor and package design—primarily through social media such as Facebook, Twitter and YouTube. The flavors, called Mountain Dew Distortion, Mountain Dew Typhoon and Mountain Dew White Out, hit store shelves in mid-April and remained on shelves through June 14. The winner, White Out, which garnered 44 percent of the votes, will become a member of the Mountain Dew family on Labor Day. (Typhoon got 40 percent; Distortion, 16 percent.)

On May 1, three teams of four people, one team for each flavor, began a cross-country tour to rally support for their beverage. As part of the grassroots effort, called DEWmocracy: The Flavor Campaign, teams organized activities such as skateboard competitions, art exhibits and sampling opportunities at concerts and sporting events. DEW fans, known as “DEW Lab” members, called the shots on which cities the teams visited and the activities, communicating with the teams via Twitter and a dedicated microsite.

The 32-day flavor campaign concluded in Indianapolis where on the Friday before race day, the three teams sampled flavors to spectators along the Indy 500 parade route. On Memorial Day, when the race took place, they lined up next to the track itself, opening the back door of their vans to the crowds, distributing samples and encouraging attendees to vote on iPads in the truck.

“DEWmocracy is all about engaging the most loyal Mountain Dew fans in a year-long partnership to develop and choose the next new DEW,” Brett O’Brien, marketing director at Mountain Dew, told Buzz. “The brand team and DEW consumers have co-created on all aspects of product development from the flavor to package design to advertising creative, so the Flavor Tour is a natural extension of the collaborative spirit of DEWmocracy.” Agency: Motive, Denver.