NASCAR: All the Dirt from the Daytona 500 – Event Marketer

NASCAR: All the Dirt from the Daytona 500 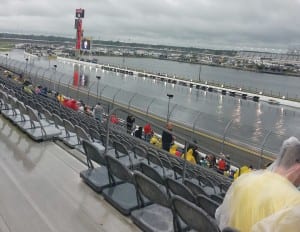 Thirty-eight laps into the 56th annual Daytona 500 at Daytona International Speedway, it started to rain. The National Weather Service also issued a tornado warning for the area and the race was delayed. More than a hundred thousand took shelter under the aluminum stands, drinking beer and hoping for the race to continue. Everyone was talking about the race three years ago that was postponed until Monday because of rain, and predicting (hopefully) that this wouldn’t be a repeat.

Those of us who stayed and waited watched a biblical-style exodus begin about an hour into the delay. Tens of thousands of folks decided to watch the rest of the race on television instead of standing in the rain and risking a lightning-
style demise like the die-hards.

I found myself sipping a Bud Light and chatting with a fellow from Georgia and his wife for most of the next six and a half hours. This was their fourth Daytona, and they were ready to wait for the long haul. Both of them were dirt track and stock car racers back at home and he builds souped-up muscle cars for living, so these two were at the heart of the NASCAR demographic. We spent hours talking about some of our dream cars, problems with racing and any number of other topics ranging from politics to religion to hot dog toppings (they put cole slaw on hot dogs down there—surprisingly good). They didn’t pay for the tickets (his boss gave them away), and they brought the beer so nobody was spending a ton of money, but man did these folks know their stuff about the race, the sport, the rules, the cars and the track. And they rocked the fan zone on the Midway. She enjoyed the concerts, and he was really happy about Ford’s exhibit (despite being a self-professed Chevy man). They didn’t go to the other activation site: the Sprint Fan Zone in the center of the oval, partly because it was sold out two days before the race and partly because they didn’t think the $90 ticket would be worth it.

NASCAR is one of the most popular spectator sports in the world. Although individual figures vary, about a hundred thousand people are watching these races live each week. At the recent Daytona 500, almost 200,000 people poured into the superspeedway. But here’s the thing: NASCAR is on the decline. Television ratings numbers had a major peak in the 2005-2006 season, and have declined sharply since then, pulling just over half the viewers last season than at the peak and this year isn’t expected to improve. Attendance at the live shows didn’t peak as high, and so hasn’t fallen as rapidly or as far, but the numbers aren’t going up either. Last year, television networks ESPN and Turner Sports gave up on the sport and declined to even enter negotiations for broadcasting rights.

So we wondered: Has this been affecting the sponsors? As is true of many major sports sponsorships, there is big money in play to get on the track (or the Midway Fan Zones), but with the declining viewership and attendance, are those sponsors still spending like in the good old days? To answer these questions, I grabbed some old copies of Event Marketer to read up on a decade’s worth of Daytona stories, hopped on a plane to Daytona Beach (suck it, polar vortex) and headed off to the races again.

What did I learn? The fans still love this sport. Really love it. The sponsors who want to get in front of those fans should love it just as much. What I saw was that the sponsors who come are still doing fun, full-throttle activations, nearly across the board. And since 2011, when EM last visited, the numbers seem to have stayed about the same. The thing is, even if the numbers are flat, the atmosphere isn’t. The speedway, the sponsors and the race all provided good times, but the fans were high-octane awesome. Here’s a play-by-play of what I saw. 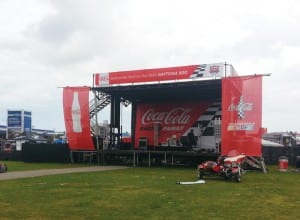 Budweiser
The King of Beers has been a NASCAR staple since the beginning, so this brand has nothing to prove. Of course, there was signage everywhere you looked, and the beer was cold and plentiful. The interactive activations didn’t leave anything on the table in terms of fun and on-the-nose targeting.

At the opening of the Midway activation area, the brand had its Clydesdale horses (and a sleepy Dalmatian) ready to greet the fans, but the real treat was the Budweiser Brewmaster Tour, where fans walked through the Bud brewing process from hops to happiness. And they had fun doing it (handled by Switch, St. Louis). 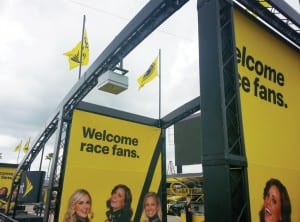 Sprint
The title sponsor of the NASCAR Sprint Cup can let its record speak for itself. It’s the Sprint Cup, for crying out loud. But the activations did leave a bit to be desired. On the Midway, there were some product displays, several life-sized screens with pretty girls in racing suits inviting folks inside the footprint and a 12-lane driving game, which allowed visitors to race each other video-game style.

The game was very cool and popular, but not terribly original. With that said, however, it was fun (handled by Octagon, Norwalk, CT). The Sprint Fan Zone in the center of the oval was all about the racing teams and the cars, and it was so popular it sold out two days before the race. So I couldn’t get in, even if I wanted to pay the additional $90 to get in on race day, which was well over what I paid for my admission to the race.

Ford
The blue oval was one of the biggest, and to my mind, one of the best on the field.  The expansive footprint featured several cars, of course, with a thematic focus on the brand’s EcoBoost engine, designed to give ample power alongside fuel efficiency. To drive that point home, the brand put the EcoBoost Wheel, a prize wheel, right up front.

Just behind it, and anchoring the right side of the space was the Quicklane, a chance for race fans with quick hands to race the clock to do simple repairs like oil changes and tire swaps. Those with the fastest time won a $500 gift card. The brand also had an arcade-style basketball game, a custom t-shirt station and a driving game (handled by Experience Communications, Dearborn, MI).

Geico & Coke
These two brands went with entertainment options, each sponsoring a music stage. Not too much to say, except the tunes were good, the fans were happy and the signage was clear.

Monster Energy
As has almost become expected for warm-weather and summer events, Monster was there to hydrate fans outside of the event. Many of us had to walk more than two miles from our cars to the speedway and Monster had stationed brand ambassadors along the way to hand out ice-cold energy drinks. Simple sampling strategy, but, as always, effective.

Goodyear
The tires that put the rubber to the road at Daytona went big for its activation. The biggest Plinko board I’ve ever seen in real life doesn’t sound very impressive, I know, but you really had to be there. And people were lining up to play, so I wasn’t the only one to think so. It was flanked by some product displays and a photo activation, but the key element was obviously the game. And rightly so (handled in-house).

From the April issue