‘Got milk?’ Challenges Cheerleaders to ‘Be Strong’ - Event Marketer 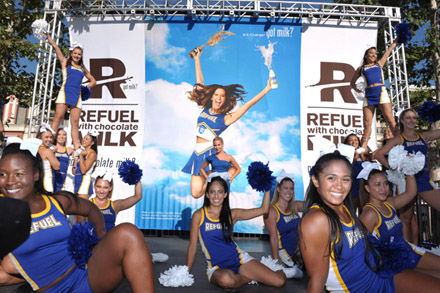 ‘Got milk?’ Challenges Cheerleaders to ‘Be Strong’

The National Milk Mustache “got milk?” campaign and American Cheerleader magazine on Aug. 31 launched the Be Strong Challenge, a program to educate cheerleaders on the benefits of low-fat chocolate milk as a recovery beverage after their workouts. An event at The Grove, an upscale Los Angeles shopping mall, served as a launch pad for the challenge.

As part of the program, Tisdale is challenging cheer squads to show how they can “be strong” by refueling with low-fat chocolate milk. Squads can submit videos of their cheers to americancheerleader.com/bestrong. Teens will vote on the strongest squad, with the winner receiving $5,000 and a chance to appear in a Milk Mustache ad in American Cheerleader. Each vote cast will earn a dollar for Cheer for a Cure.

“We wanted to spotlight cheerleading as the intense athletic feat that it is,” Miranda Abney, senior marketing manager for the National Milk Mustache “got milk?” campaign, told Buzz. “And we wanted the campaign to be social, since teenagers are so social.”