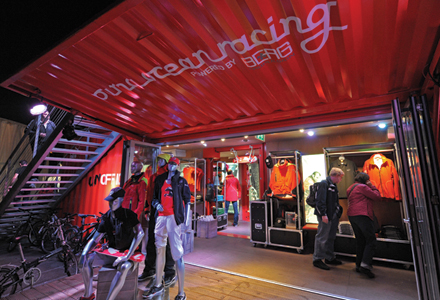 The Volvo Ocean Race is all about the speed and spectacle of sailing on the wide-open seas. PUMA, which is sponsoring a yacht called Mar Mostro (it means “monster of the sea” in Italian), brings that excitement on shore with its bright red retail store and roof-top lounge in the race village, a hub of sponsor activities and entertainment that takes place in 10 historic ports along the way. PUMA will re-use the installation for Olympics activations in London this summer and also for this year’s America’s Cup, which takes place in Newport, RI, in June and in San Francisco in September. PUMA’s pavilion is a case study on navigating challenges posed by the grueling course, the uncertain weather and the occasionally rocky shoals of event marketing. So hop aboard, mate, to see how the brand does it.

The Need for Speed

The eight-month, nine-leg Volvo Ocean Race began in Alicante, Spain, on Nov. 5 and continues until early July when it will conclude in Galway, Ireland. At each stopover on the course, including Abu Dhabi, Auckland, Cape Town, Itajar (Brazil), Lisbon, Lorient (France), Miami and Sanya (China), PUMA’s pavilion is up and running by the time the first racing fans and yachts are dockside.

The installation, which is called a “quad,” takes its name from the four 40-foot industrial-looking shipping containers that comprise it. Three of the containers form the retail space and the fourth, which sits above them, functions as the rooftop lounge for harbor-watching and other activities during the day and parties at night. Together, with the gigantic Mar Mostro tentacles reaching out from its top, they showcase PUMA’s commitment to ocean racing.

A crew of four installs the quad in four days—which involves leveling and connecting the containers, hooking up to electricity and arranging the bar—and dismantles it in three. Four staffers can fit out and merchandise the store in one day, thanks to a tailor-made system that can be modified to accommodate local needs yet strong enough to withstand the severe weather conditions bound to occur somewhere along the 39,000 nautical miles of the race. Rugged-looking industrial flight cases that are used to ship delicate A/V equipment serve as cupboards for hanging and displaying PUMA apparel sold in the store. A key clamp system like those in construction scaffolding adds to the industrial look and provides strength. The whole set-up is designed to hold up to hurricane-level wind forces.

One complication, however, stems from the fact that this is a race and the yachts are sailing full speed ahead from one port to the next. To ensure that the installation arrives before they do, PUMA actually built two quads that it loads on separate container ships along with two sets of everything needed to outfit the spaces, then leapfrogs them one stop after another along the way. “That’s a huge investment, not only in producing the two quad stores, but also the logistics behind it, and having staff available at every stopover, making sure the merchandise is there in time and that they are in line with all the local rules regarding customs and health and safety,” says Hajo Reinders, managing director at Kubik, Amsterdam, which handles the program.

PUMA’s sailing yacht is an eye-catching black vessel with vibrant red octopus tentacles that creep onto a sail that features the brand’s aqua cat logo. On shore, its bright red quad stands out from the boxy, white temporary installations typically found in sponsor villages, a look that befits PUMA’s colorful brand image.

Inside the store, consumers can have their picture taken wearing PUMA sailing gear at a replica of Mar Mostro’s wheel with the sea monster trying to get onboard in the background. They can send the photo to friends via email and upload it onto sites such as Facebook. To retrieve the photo, however, the program sends them to PUMA’s sailing store landing page, where they can buy the apparel if they haven’t already done so.

Upstairs, the PUMA lounge with its bar and dance floor provides harbor views and a chance to party with local influencers and djs, a nice tie-in with the PUMA campaign, which besides the sailing crowd targets after-hours athletes who appear at the PUMA social club in the evening.

The lounge also is used for on-shore events such as autograph sessions with the sailors when they are in the harbor, and appearances by Marmo, a fun, Disney-type character who serves as the Mar Mostro’s honorary crew member and the face of PUMA’s youth ocean conservation campaign. Reading sessions of the illustrated children’s book, Marmo Saves Our Seas, educate children and their families about ocean preservation. Older kids can try out new stand-up paddleboards designed by PUMA partner and surfer Laird Hamilton.

“The Volvo Ocean Race, one of the world’s iconic sporting events, proves to be an extremely successful marketing tool for us and an important, ongoing launch pad for the sailing product category,” says Kai Perlinger, head of retail events and international marketing at PUMA SE. “We look forward to building the sailing category even more throughout this race, as well as expanding into other forms of outdoor lifestyle ventures. Our on-shore activation is a good example of PUMA’s continuous drive to make events more fun, exciting, unique and engaging.”