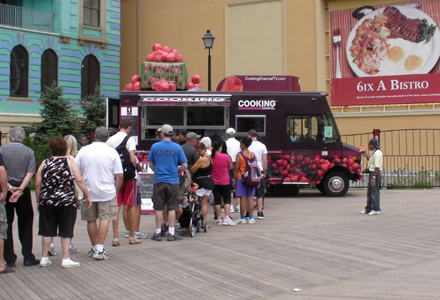 Adhering to its mantra of “for food people, by food people,” the Cooking Channel is partnering with local gourmet ice cream and popsicle shops on its 15-city summer tour to reach serious foodies and differentiate its hardcore cooking content from the more reality competition-based shows on sister channel, the Food Network. The tour kicked off in June in New York City in a custom-designed ice cream truck branded and wrapped with images of berries and an inflatable basket of raspberries on top, and is stopping at farmers markets, food and film festivals and other family-oriented events through October.

“We wanted to generate some grassroots buzz for the Cooking Channel. It’s a way for us to get out there and differentiate the Cooking Channel from the Food Network, and allow viewers to meet the talent, sample the shows and start to get familiar with the new network,” Katie Ilch, marketing director at the Cooking Channel, told Buzz. “We wanted to partner with local shops that embodied this idea and celebrate them while sharing that with our new fans.”

The local ice cream shops are creating one-of-a-kind ice cream flavors for the tour. For example, the Brooklyn-based People’s Pops concocted flavors like Plum Tarragon, Raspberry Basil and Strawberry Rhubarb for the truck’s stop at the New York Food and Film Festival June 25-25. In addition to a full-time two-person team and Cooking Channel talent like the stars of “Everyday Exotic” and “FoodCrafters,” staff from the local ice cream shops also lend a hand to reach the goal of serving up 3,000 samples of gourmet ice cream per day at events. On a monitor on the side of the truck consumers can catch episodes of Cooking Channel shows and share their favorite food memories in video testimonials via a camera, which are aired on the Cooking Channel’s website as well as Facebook and Twitter. Participating consumers receive a “Food Person” tattoo. Visit cookingchanneltv.com for the full tour schedule. Agency: Oasis, Seattle.