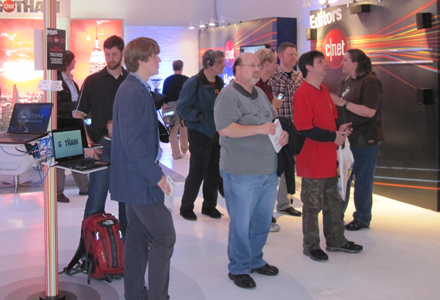 The gadgets were presented in vignettes that represented how they would be used and integrated into the home. The den, for example, showed a home theater set-up with four HD TVs, couches and consoles for video games such as a Panasonic TV, Sony Playstation 3, a Blu-Ray player and Sony sound bar. The home office area featured wireless printers, a Sony Vaio laptop and Apple MacBook Pro. An “on the go” area showcased a Nissan Leaf, complete with a charging kiosk, as well as mobile phones, laptops, sound equipment and OnStar, which was another editor’s pick product. In every case, consumers got to try out the products for themselves or speak with on-site CNET editors at a help desk to get the real skinny on them.

Programs and events targeting various interest groups such as high-tech mommy bloggers, other nerdy types and camera buffs also took place. The Cool Mom Tech mommy bloggers, for example, received lunch and make-up touch-ups for a photo shoot sponsored by Adobe that took place after a panel discussion with CNET editors talking about their favorite products. Adobe also took camera lovers on four-hour photo walks throughout the neighborhood followed by a seminar on photo retouching.

Other sponsor activity included the Energizer Portable Power Station where attendees could recharge their devices or recharge themselves at a coffee bar. LG’s Third Dimension area featured a 3D blind demo in which guests compared an LG TV against a competitive model. They also got to play with the Xbox 360 3D game. Canon showcased its PowerShot camera and photo printers in an area where attendees could take and print holiday-themed photos for holiday cards and décor. Dell offered its newest XPG laptops for hands-on trial.

Evening activities included New York City Nerd Night, sponsored by LG, which includes speed dating for 30 to 40 people, and Glam Night as well as other gatherings.

“We did a consumer-facing event over the summer at San Diego Comic-Con, and it was really successful,” Sarah Bolton, senior director of marketing at CBS Interactive, told Buzz. “We decided to bring our online holiday gift guide to life in three dimensions with a living, breathing gift guide.” Agency: MKTG, New York City.