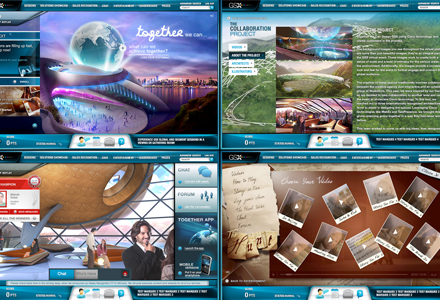 In 2009, Cisco Systems set out to save costs by taking its weeklong annual sales meeting, the Global Sales Experience (GSX), out of the real world and into a virtual one for the first time in its 20-year history. That experience taught the tech giant several valuable lessons about what works and what doesn’t when it comes to educating and motivating a driven and competitive sales force in a non-physical space.
(Check out last year’s story here)

After last year’s event, the Cisco events team reviewed feedback surveys, login reports and other metrics and learned that the environment and the augmented reality game it called “Threshold” were top-performing elements. What the attendees struggled with was focusing on eight hours worth of live content every day, and missing out on the recognition elements they had looked forward to at previous live events.

Taking on the event again this year, which ran from Aug. 16 to Sept. 10, senior manager-Global Sales Experience at Cisco Systems, Angie Smith, set out to address these issues and improve on the areas that worked well. Step one was to make the event more of a hybrid, with local Cisco offices hosting group sessions via its proprietary Telepresence technology. The local events mostly addressed the recognition concerns, helping local executives and managers to showcase and reward superstar salespeople in front of their colleagues.

The virtual environment was a huge hit last year, with attendees almost universally calling it “stunning” and “beautiful,” according to Smith, so exceeding that mark was a new challenge. To raise the bar even further, for the 2010 GSX redux, she and her team brought in internationally recognized architects and graphic designers from all over the world, using Cisco products to facilitate global collaboration, to design the new environment, which as a result resembled a utopian fantasy dreamscape.

While the Threshold game was also a big hit last year, it may have been too much of a good thing. The post-event analysis revealed that the hyper-competitive sales force was so set on winning, they were checking into sessions just to get the next clue or puzzle for the game and once it came out, they would bail. Obviously a problem when it came time to meet educational goals. The game did drive engagement like a dream, however, so to keep what worked and not lose attendee focus, the new game, dubbed “The Hunt,” was scaled back and kept separate from the main event and only ran for two weeks. Like last year, though, it was still tied to Cisco product information and technology, so it was again a key educational tool—just not as integrated this time.

Other gaming tools included head-to-head Sudoku challenges and the “Togetherizer,” which was a music mash-up software that allowed players to upload a sound clip which would then be “mashed” with other players’ sounds to make a new piece of music. They were all archived for players to listen to at their leisure.
To keep the messaging consistent and facilitate the collaborative nature of GSX, under the 2010 theme of “Together We Can,” Cisco this year designed and built a custom internal social media platform known as the Together App, which the sales force could install on their mobile devices and access via the virtual environment. They posted learnings and comments from sessions and collaborated on session discussions via the platform, which continues to exist within the company’s intranet. It was also a vehicle for checking into sessions and filling out evaluation surveys. To showcase and encourage attendees’ community spirit, Cisco integrated volunteer opportunities into GSX and donated $100,000 to community charities on behalf of the Cisco sales force.

The changes and improvements for GSX 2010 are still being evaluated, but early metrics look positive. The average overall session score was 4.75 out of 5 and more that 15,000 unique attendees checked out info and chatted with experts in the Solutions Showcase trade show area. The evolution isn’t over for GSX, though. As the data from 2010 paints the new picture, the planning begins for GSX 2011.

“I think we almost have the right formula,” Smith says. “It’s a complex chemistry to meld content and engagement successfully.” And mastering that chemistry is a process, she says, that Cisco is uniquely situated to accomplish.

“Virtual is part of what we say, do and walk every day at Cisco. It’s in our DNA,” she says. “We’re risk-takers here and sometimes they pay off.” Big time.  EM