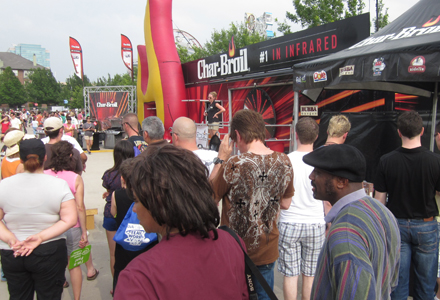 Char-Broil, the outdoor cooking company, in April launched the 10th edition of its annual mobile grilling tour. The campaign this year has been expanded to 30 weeks and will travel to 27 states as part of an integrated campaign that also is measuring the effectiveness of its marketing strategies.

“In the past, when we did experiential marketing, we would send the tour off on its way,” Michelle Zeller, vp-marketing at Char-Broil, told Buzz. “This year we are trying to knit and weave it all together.”

In Dallas and Indianapolis, for example, Char-Broil is activating retailer sales associate training and p.r. as well as billboards and traditional TV advertising. In other markets, a flash mob is traveling behind mobile billboards that emit barbeque smells to draw crowds to Char-Broil’s 50-foot trailer, which pops open with a stage, and houses a commercial kitchen and two touch screens for data gathering.

Throughout the traveling interactive tour, consumers can sample burgers, sausage, chicken and other foods prepared on Char-Broil grills, which are made with an infrared technology that retains their juices. Consumers also can enter to win prizes or more information. The tour is traveling to “Taste of” festivals, the Indianapolis 500, barbecue competitions and more. Aidell’s sausage, Amerigas, Bubba Burgers, Dole and Flatout bread sponsor the tour; the Pork Board is a partner. Social media, including Facebook, Flickr, Twitter and YouTube are part of the plan.

Char-Broil also has partnered with House of Heroes, a charitable organization that  refurbishes homes of civil servants and veterans. The tour sets up on the street, cooks food for the volunteers and leaves behind a grill.

“Demos are the best way to show to our consumer what our point of differentiation is,” Zeller said. “They get it a lot quicker this way.”

Preliminary metrics prove the point. After trying product cooked on Char-Broil grills on tour, 65 percent of attendees indicated they were likely or extremely likely to buy a Char-Broil grill; 82 percent said they would recommend Char-Broil to a friend. Agency: Marketing Werks, Chicago.