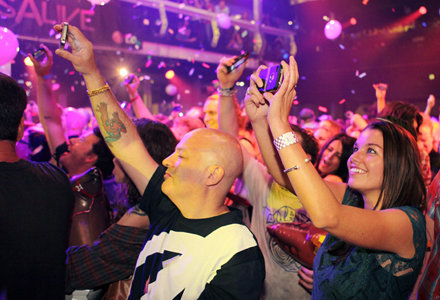 To promote the launch of LG Thrill 45, its glasses-free 3D smartphone that will be available on pre-order on Aug. 1, LG Mobile teamed up with YouTube and rock band Jane’s Addiction to present the world’s first user-generated concert.

Fifteen hundred people attended the 70-minute show, which was held on July 25 at Terminal 5 in New York City’s trendy Hell’s Kitchen neighborhood. More than 100 attendees selected by LG and the band, including ticket holders, media, bloggers, influencers and New York University film students, used the handset to capture 3D video footage of the concert. The concert also streamed live in 2D on YouTube to millions of viewers.

The amateur in-concert photographers received a brief training session on the phone and its capabilities shortly before the show began, then shot what they chose to highlight. About 20 phones were statically positioned around the venue, some attached to the band’s drum set and amplifiers to collect various camera angles. That footage will be edited into a 60-minute 3D documentary highlighting the show from start to finish, spotlighting the band’s involvement, their arrival on set, the Thrill users’ training and the show itself. The documentary will be released on Aug. 4 on the LG Thrill YouTube 3D channel, youtube.com/comealive.

Jane’s Addiction band members also used the phone to shoot 3D video from their road tour that is available on YouTube.

The stage set was designed specifically to highlight the phone’s 3D quality with a double arch of truss work loaded with lights and lasers that highlighted a fabric pinwheel, giving it the appearance of spinning. A balloon drop of regular balloons as well as mylar animal shapes and clear latex balloons with flashing green and blue LED lights inside and confetti cannons also added to the 3D effect.

“The event was designed to not only attract attention and create a lot of buzz about the launch of the device, and to have people experience it hands-on at the event, but also communicate to those who were at home or walking into an AT&T retail store the power of 3D, the ability to create, enjoy and share it wherever you are,” Tom Carroll, marketing manager at LG Mobile, told Buzz. “We wanted to show consumers that 3D isn’t a gimmick and convince them that content, whether user-generated or active content out there on the web, is easy for them to create on their own and enjoy. Seeing is believing. 3D is something that needs to be experienced.” Agency: Momentum, New York City