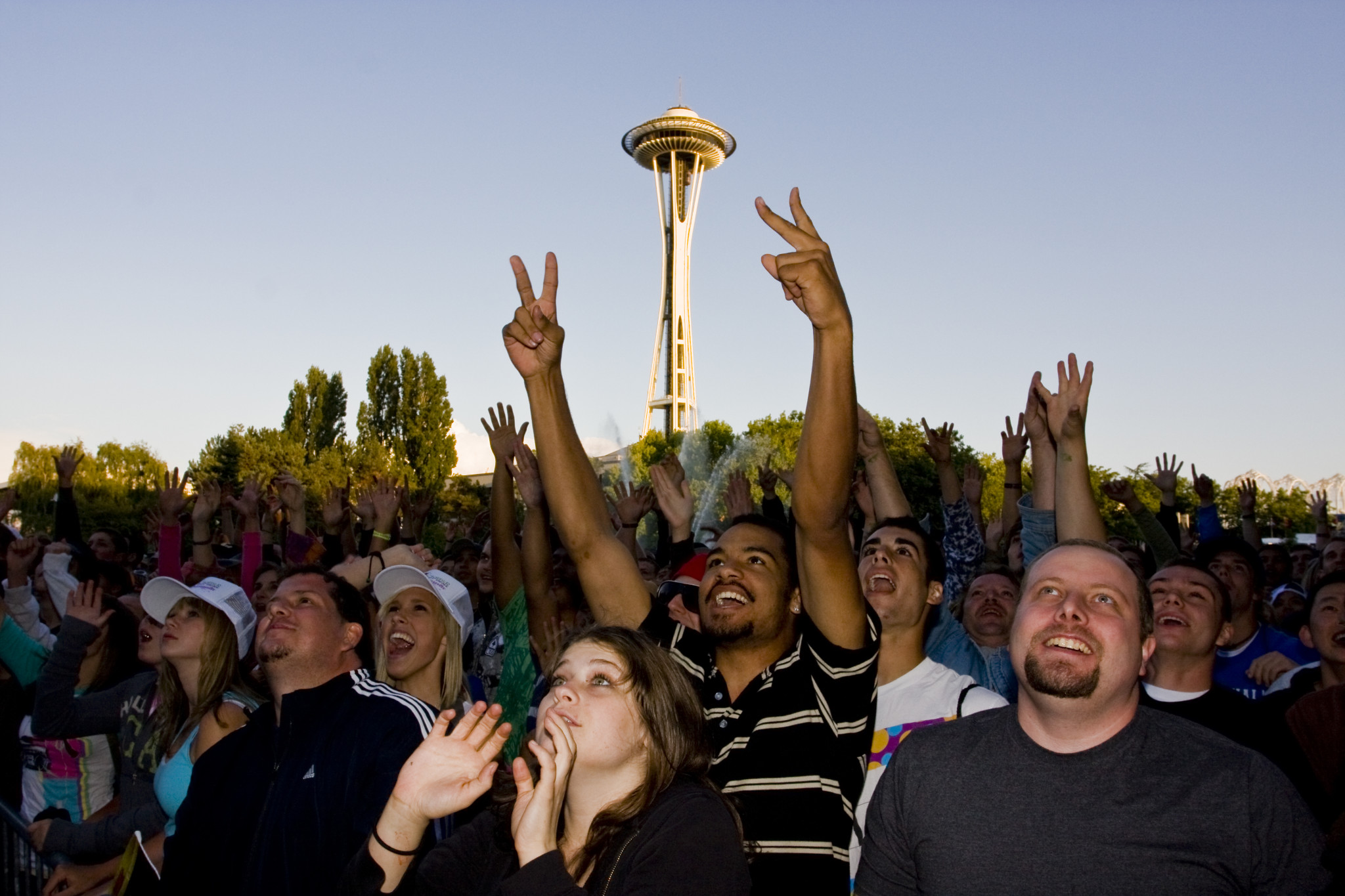 The independent spirit spawned nearly 20 years ago by Seattle’s grunge movement still lives on at Bumbershoot—one of the nation’s largest arts and music festivals. In the shadow of the Space Needle sponsoring brands set up camp in an effort to grab a few minutes with finicky music lovers between performances by emerging artists and indie favorites including this year’s headliners Beck Band of Horses Stone Temple Pilots and Death Cab For Cutie. EM grabbed an umbrella and a coffee mug and traveled to Seattle for Labor Day weekend to bring you the event’s greatest brand activation hits.

GUITAR HERO
In the shadow of the space needle attendees could take their rock-star fantasies and try them out on soon-to-be-released Guitar Hero video games. At what may have been the highest-pressure consumer experience on the festival grounds attendees took their best shot at being momentary rock stars on one of three stages that unfurled from the brand’s tour bus—the Main Stage for confident groups of four or more and two Shred Schools where wannabes could practice with headphones in relative obscurity. The sizeable crowds that gathered were tough and unrelenting. Screw up and swiftly get jeered. Get past the tricky drum and guitar intro finish the song (most popular tune of the day: Float On by Modest Mouse) and win over the crowd. Luckily encouraging brand ambassadors were on hand to lighten up the performance anxiety and help players restart each time their botched air guitar riff stunk up the game. Main Stage winners received t-shirts and Shred School winners got water bottles. Bumbershoot marks the 10th festival stop of the summer then the bus is off to 14 colleges this fall. Agency: OnTourBus Incline Village NV.

STARBUCKS
The tour that hit Chicago Dallas and Denver before its last stop in Seattle marks the first time the ubiquitous brand has taken its master roasters (the people and the machinery) on the road. Starbucks Summer Taste Tour attendees were invited to grab a chalkboard visit each of four tasting stations and then rate each blend from one star to four stars. Tasters received a free half-pound of beans on the spot coupons for another pound and a pocket brewmaster guide. Visitors could grab a seat in the on-site café write a note on a coffee-bean inspired postcard and stick it in the mailbox. (Free postage.) EM ran into Starbucks manager-experiential marketing Andrea Buckmeier who said the tour helps “extend the touch” from a fleeting sample to something more meaningful. The strategy delivered. After swilling seven iced mocha espresso and vanilla latte samples in under 10 minutes EM’s Jessica Heasley had to stop her engagement. But the staffers never let a tray go empty or a consumer walk by without some form of friendly engagement. We counted six face-to-face “touches” during our one-time visit. Agency: Passage Events Seattle.

DELL
At the Dell Summer Rocks geodesic dome everyday people walked in but full on rock and rollers walked out. First stop in the transformation laptops where consumers could choose from 100 songs to create their own mixtape of 20 tunes—all from bands performing at this summer’s music festivals. (An email address gets you a link to your music post-event.) At a mini hair salon visitors got their hair beehived sprayed pink and mohawked then swung by the airbrush tattoo guys on the way out for a little body art. Next folks could mix and match graphics from a giant pile of Brooklyn NY-based artist Mike Ming’s designs then take off their t-shirts in a changing room and have the artwork heat transferred to their tee right on the spot. (Ming’s designs are featured on the newest Dell Art Series laptops which were artfully displayed and suspended from the ceiling of the dome.) Finishing off the overall look attendees gathered inspiration from piles of magazine clippings to create buttons at the button-making station. Finally visitors could log on at one of six laptops to a live blog post to Facebook or register at delllounge.com to win tickets to the next tour stop. Or just hang around play ping pong watch live Q&A’s with festival bands and marvel at Ming who was on site creating a 10-foot-by-10-foot mural live at the event. Attendees couldn’t get enough of the hands-on and highly self-expressive Dell experience and neither could we. Agencies: Mother and Enfatico both New York City.

PIONEER
Hyundai gave Seattleites a first-hand look at the automaker’s first luxury performance vehicle the Genesis by setting up a tent at one of the main entry gates of the festival. Across the street interested attendees could hop into one of four waiting sedans for a ride with a professional driver. Ride and drivers received free Zagat guides while passersby and exhibit visitors received branded lens cleaners. Incoming traffic seemed to be sluggish at both the booth and the ride and drive but at $40 a pop for daily tickets we suspect attendees just wanted to get in to hear the music. Agency: Jack Morton New York City.

ROCKSTAR
We couldn’t decide if Rockstar’s sponsorship and activation was a stroke of genius or a total miss. On the one hand teens and their families flocked to the brand’s eye-catching vert ramp and then stuck around to catch Rockstar’s sponsored riders in action. So points for the on-site crowd development. On the other hand the adrenaline and testosterone-inspired energy drink brand (served up by girls in tight tees and micro-minis) is probably the last thing most alternative music-loving Northwest natives would subscribe to. Can a brand simultaneously appeal to one target while repelling another and still benefit in the end? Our verdict is out on this one.

SAMSUNG
Presenting sponsor Samsung Mobile leveraged one of the best locales at the festival by turning its tented experience into another busy music venue called the Sound Lounge. Inside the 30-by-45-foot space mix masters from Scratch Academy played throughout the day drawing healthy crowds and even a few impromptu dance parties on the lawn just outside the tent. Inside attendees could jump on a turntable and scratch a few tunes of their own. (The only sour note: laser-printed “scratch” signs on sheets of white paper at each turntable. The uh signage looked like a cheap afterthought in an otherwise swanky space.) Consumers could check out product displays and grab a scratch card for a chance to win a sweet seat at the brand’s Ultra Lounge VIP area at the main stage. Visitors to the all-access Ultra Lounge area could pick up a night glo pin. Across the festival grounds at the Get It Lounge attendees could grab a backpack. We get the multiple venue/multiple touch point idea but found racing from tent to tent for tchotchkes a bit anticlimactic. The high point of the Lounge experience was the photo activation where consumers could dress up in rock star gear pose for a shot and then eight seconds later take home their photo in a branded sleeve. The nifty touch screen photo management console called the Robot color corrected the shots and let folks check out their snapshots instantly. Photo activation: LVPhotoParty Las Vegas; Polite In Public Los Angeles.

ZONE PERFECT BAR
The diet bar brand could have just sampled its snack bars but it amped up its activation to connect consumers to its theme: Music in Your Mouth. Passersby could grab a full-sized sample and a coupon but they could also stop in and take a seat to enjoy a full schedule of daily performances by local musicians. At a sign-up area consumers were invited to trade their personal data and opinions on the ZonePerfect bars for a branded backpack filled with more samples and a shot at winning an autographed Gretch guitar signed by Josh Groban Jason Mraz and many others. Inside the exhibit attendees could jump into a photo set and then later go online to drop their image into one of several album covers. At the back of the space the brand ran looped footage of its Where Music Meets Film: Live at The ZonePerfect Bar Concert on two plasma screens—a tie-in to its larger sponsorship program that includes outreach at art music and film festivals.

CLIF BAR
Clif lured in a constant stream of booth visitors with its copious mounds of Clif Bar samples (check out the Peanut Butter and Jelly Mojo bar—sounds weird but tastes delicious) but kept the experience sticky with a few clever extras that all mapped back to the brand’s environmental commitment. At its five iPod listening stations attendees could listen to tunes from bands that are part of the Clif Bar GreenNotes program which helps emerging artists green up their tours. Folks could also fill out a Pledge to the Planet postcard promising to lighten their diets commutes and landfill contributions and drop it in a slot to be mailed to themselves after the festival. At a giant map consumers could also dip their thumbs in a colored ink of their choice and stamp the city where they’re from. Next to the sampling bar a plastic water jug was on hand for recycling Clif Bar wrappers via a service called TerraCycle which turns recycled energy bar wrappers (and lots of other things) into new products.

BURT’S BEES
Just outside of the festival grounds Burt’s Bees not only captured people on their way into Bumbershoot they grabbed Space Needle and Experience Music Project visitors too.
Outside the yellow tent staffers ran trivia games on a mini stage to help educate consumers about the icky ingredients in their skin care products. Once inside consumers traveled through a u-shaped exhibit where they could try the entire line of Burt’s Bees products at running sinks and beauty bars and smell and touch real ingredients like coconuts almonds and grapefruits—a tie-in to the exhibit’s main theme: Natural Versus. Visitors who took the time to wash their face and try the new line of facial soaps and moisturizers received a free lip balm. Four massage therapists were on-hand to give hand massages to those who signed up with an email address. On the way out attendees could purchase products on the spot and grab a free packet of bee-friendly flower seeds to help restore the waning honeybee population. Passersby were also invited to trade in their petroleum-based lip balms for Burt’s Bees beeswax-based samples. We’ve never seen a healthier-looking group of brand ambassadors in our lives. Agency: AMP Boston.