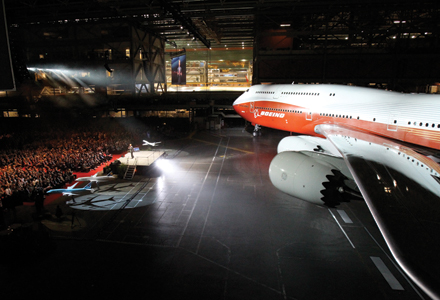 Boeing is Incredible Again with 747-8 Reveal

You might say it takes a village to pull off an event as big as the reveal of the newest Boeing airplane, the 747-8 Intercontinental, which also happens to be the largest commercial aircraft built in the U.S. and the longest passenger aircraft in the world. At least that’s how David Okrent, brand manager for the new plane, puts it.

The 747-8 reveal took place on Feb. 13 in one of Boeing’s gigantic manufacturing bays at its Everett, WA, plant, where more than 10,000 Boeing employees, their families, media and a select group of industry VIPs watched in awe as an enormous 61-foot by 225-foot kabuki drape dropped dramatically before the new plane. But to make that happen, airplanes had to be moved out of the manufacturing bays then rolled back afterwards to resume production. The aircraft had to remain hidden and its new red-orange sunrise livery (the paint job on the side of the plane) kept secret until the very last minute. Then there was fire and security protection, and dogs sweeping the area to make sure it was clean. The effort required a cast of 50 to 100 people, including Okrent and Boeing communications manager Jim Proulx, supported by Chicago-based Event Architects (EA), who worked around the clock to keep the plane under wraps.

“The reveal was a celebration for our employees, our customers, our suppliers and even guests of our employees to recognize the hard work that goes into creating a new airplane program,” says Proulx.

But without the collaboration between Boeing and EA, and planning that began months before in November, that celebration could have become a calamity. Instead, the reveal went off without a glitch, which was, to borrow from the theme of the event, incredible.

The theme, “Incredible, Again,” pays homage to the legacy of Boeing’s original 747, one of the most successful airplanes ever built and among the world’s favorites, as voted by the readers of Global Traveler magazine for four years in a row. “It was incredible when it was first built because of its success in connecting people and continents together, and now it is incredible again as a new aircraft that can fly farther and faster and carry more payload with less fuel and less emission and the lowest seat mile cost of any airplane,” says Okrent.

The words “Incredible, Again” graced a logo shaped as a classic 747 plane that was featured on signage, event badges and presentations. It adorned bags of jellybeans distributed at Boeing’s fabrication plant and the red rubber thundersticks attendees received as they entered the hangar. It can be found now on goods sold in the Boeing company store.

In the days before the reveal, all but the plane’s wings was covered in brown paper then wrapped in plastic in Boeing’s paint facility. In the middle of the night, the plane was rolled into the bay, unwrapped and draped for the reveal, with nary a crack to peek through. “Successfully hiding a 747 was one of the biggest challenges,” says Amy Spielholtz, producer at EA. “As everyone was coming to see the new plane, we had to make sure they didn’t see it before it was revealed, and a huge part of the surprise was the red and orange livery. It was something no one was expecting and no one was supposed to know.”

Boeing invited press and media from the aviation trade and travel writers for a three-day program of briefings, tours and meetings that surrounded the reveal on the second day. Key customers were invited to a dinner at the Museum of Flight in Seattle on Saturday night before the reveal and a luncheon afterwards at Boeing’s Future of Flight Aviation Center, across the street from the manufacturing facility.

The reveal itself drew 10,000 attendees, mainly employees and their guests, who filed into the area an hour before the event started. Three hundred and fifty volunteers clad in “Incredible, Again” logoed red hats and windbreakers directed people where to stand. Two members of Okrent’s group with a comic bent warmed up the crowd and demonstrated how to use the thundersticks.

Steve Raible, former NFL wide receiver with the Seattle Seahawks and currently a TV anchor in Seattle, emceed the program, which featured addresses by Boeing and Lufthansa executives (Lufthansa is a customer). Two videos created by EA using footage supplied by Boeing celebrated the legacy and emotion behind the moment. The first, “Incredible, Again,” charted the progress of the 747 since its inception to the present, showing the original plane and the employees and suppliers who worked on it. The second video, “Moments,” celebrated special times that they contributed to building the new aircraft. At intervals throughout the event, employees texted messages to screens displayed to the audience.

“We wanted to let people see the past, to pull at their heart strings as they see their families and generations leading up to this moment,” says Clinton Withers, co-producer at EA.

Throughout the hour-long program, the lighting, which initially cast a bluish, pre-dawn glow about the space, slowly brightened, a nod to the state-of-the-art lighting technology inside the plane and the sunburst livery on its exterior. The last track of the Moments video led into a live musical performance by two violinists and two tympanists who started playing slowly, then as the lighting intensified, gradually raised the energy level. Finally, as the lights pulsated and the audience banged its thundersticks, the drapes fell to reveal the new 747-8. After the fever pitch subsided, attendees filed forward for a closer look at the plane.

The event was rebroadcast on newairplane.com, tweeted and Facebooked around the world, reaching an additional 60,000 to 140,000 people, not to mention media buzz generated within the airline industry and media coverage in major national outlets. And that doesn’t include people who snapped their own videos and uploaded them to YouTube.
Incredible, indeed!   EM