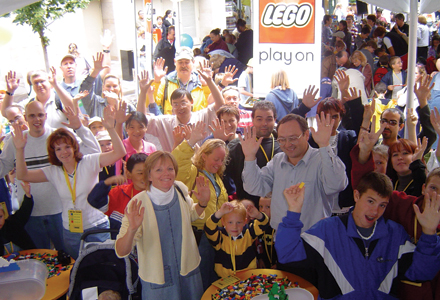 LEGO Goes Beyond the Brick

Michael McNally, brand relations director at LEGO, recalls being fascinated as an 11-year-old on a shopping trip with his mom at Columbia Mall, in Columbia, MD, where the LEGO World Show was on exhibit.

“I remember distinctly in the center court of the mall seeing the Mark Twain house, a red Victorian made completely out of LEGO bricks,” the self-confessed former LEGO kid explains. “For me, that was, wow, amazing. I looked at my mom and said, ‘I want to build that when I get home!’”

McNally’s reaction resembles that of most kids today who visit the LEGO Experience tour, Comic-Con or other marketing events the brand has activated for 25 years under the steady hand of Vince Rubino, event marketing manager, who was working at the company at the time of the LEGO World Show. He remembers when LEGO Master Builders at the company’s U.S. headquarters in Enfield, CT, created the model, which now resides in the actual Mark Twain house in Hartford.

“From day one, my job has been to take LEGO out on the road and provide consumer experiences,” Rubino says. “We would have traveling exhibits with LEGO models at retail or in a large mall, and we would always have bricks there for kids to play with, to get the brand into the hand. We didn’t know it was experiential marketing, but that’s what we’ve been doing since day one.”

Those traveling exhibits, which measured five feet wide and 15- or 20-feet long, incorporated LEGO models and play tables housed in a rented 24-foot Ryder box truck that Rubino drove from city to city. “I was the brand ambassador, the truck driver, I was everything,” Rubino says with a chuckle. Larger scale efforts brought two branded tractor-trailers into mall parking lots and LEGO displays that extended the length of the mall.

LEGO’s first forays into event marketing may seem antiquated compared to today’s sophisticated setups, however, the concept was spot-on as far as going into a consumer environment and providing a brand experience. Since the early days, LEGO’s core values—creativity, imagination, fun, quality and learning—have inspired those experiences.

“It starts with the product,” says Scott Moller, managing partner at Marketing Werks, Chicago, which has handled LEGO tours since 2000. “It’s a quality product with a great reputation and a strong fan base. What we try to do is create an experience that matches their expectations, to give them the experience they would expect from LEGO.”

Based in Billund, Denmark, LEGO was founded in 1932 on the principle of “play well” (or “leg godt” in Danish) by Ole Kirk Christiansen, a local carpenter, and is still privately owned by the family. Its experiential marketing has pretty much remained true to that concept with the traveling exhibits and play tables designed, as Rubino says, to get the colorful little bricks into the hands of fans. But, as the company grew and developed more specialized play sets such as the science-fiction inspired Bionicle collection and licensed products created in conjunction with “Star Wars” and other film and cartoon franchises, its events have evolved as well. And then there was the period, five or six years ago, when sales slid and event marketing was put on hold.

Since then, the company has reorganized, and thanks to a renewed focus on its core consumers, boys 6 to 12 and their families, LEGO has rebuilt itself into a global toy powerhouse. In the past two years, it has grown from the No. 6 toy manufacturer in the world to No. 3, in an industry that is flat to declining. And now, after a six-year hiatus, one of the pioneers of mobile marketing has returned to the discipline it helped define, sending a signal of renewal to event marketers across the country. From reaching families shopping at the malls that were popping up around the country 25 years ago, to more recent activations like the LEGO Experience Tour, KidsFest, which launched as a pilot program last year in Hartford and will travel to four cities in 2010, and this year’s Summer Games Tour, LEGO is back.

In a world where being cool means high-tech and plugged-in, kids remain satisfied with a physical LEGO experience. Thanks to nearly 25 years of honing its craft, LEGO’s event marketing team is poised to deliver.  EM