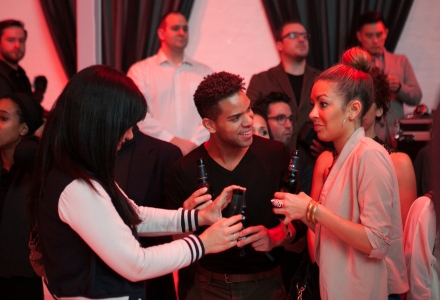 Beck’s, the German beer brand owned by Anheuser-Busch, on January 29 held a pop-up event in New York City to support the launch of Sapphire, a new premium beer.

The event, which took place at Open House Gallery, in the city’s SoHo area, is part of an integrated campaign that includes advertising on this year’s Super Bowl and a sponsorship of Mercedes-Benz Fashion Week, as well as other initiatives that will continue throughout 2013. Pop-up events also took place in Beverly Hills, Chicago and South Beach.

German artist Maritz Waldemeyer created the luxurious pop-up environments which the brand described as “jewelry stores,” playing off the name of the new brew. The outside of the installations featured windows that presented the beer in a way similar to high-end jewelry displays. Inside, taking his inspiration from the sleek black bottle, Waldemeyer continued the theme of luxury and elegance. An avant-garde art piece in a geometric shape designed by Waldemeyer and inspired by the sapphire created a focal point. Attendees sampled the new beer and listened to rock-jazz pianist ELEW, fresh off his Presidential Inauguration performance, and Australian disco artist Chet Faker, who performed in the brand’s Super Bowl spot.

“The jewelry pop-ups allow us to talk about the brand one-on-one with people who are very influential,” Chris Curtis, brand manager at Beck’s, told Buzz. “They also help us achieve our national awareness goals because of the pr that comes from those events. They are very, very important to the brand.” Agencies: Moderne Communications, New YorkCity; Mosaic, Chicago; Group 360, St. Louis.