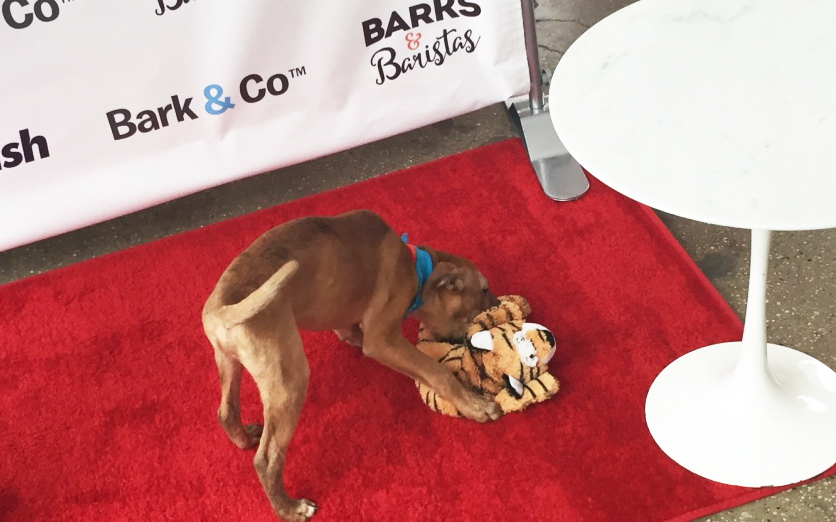 Tails were wagging, coffee was brewing and photo opportunities were boundless on Oct. 1 at the Barks & Baristas Ad Week event in New York City. Co-presented by Bark & Co., a company that sends Bark Boxes filled with a curated selection of dog toys and treats to subscribers each month, and event marketing platform Splash, the event served as both a brand activation and an adoption affair for more than 150 influencers. The combination of event marketing and puppies was just too much fun to resist, so EM was on the scene to get a firsthand look at the experience—and give a few belly rubs along the way.

Set in a loft in Times Square, Barks & Baristas was a morning event, which required a little extra mojo for human attendees. Fortunately, Bark & Co. and Splash recruited baristas Melissa Knott from Grounded Coffee Catering, and Craig Farelly from Brewklyn Grind, to keep the caffeine flowing. The pair’s unique coffee concoctions were served in branded mugs made of chalkboard material while KG Fare passed around bite-sized breakfast treats to enjoy and Emre Yilmaz provided live tunes.

Meanwhile, small tables set up around the space offered dog-themed swag, like premium maple bacon dog biscuits and stickers with leg-lifting pups that read, “The world is my dog park, you’re just living in it. #Barkbox.”

And then there were the puppies. Around 25 dogs of every age, breed, size and personality were literally unleashed into the room to explore and mingle as they pleased. While some of the canines were celebri-dogs with serious social media followings, like Chloe the Mini French Bulldog and Hudson the Goldendoodle, most of the pups came from adoption shelters in Manhattan, including Foster Dogs NYC, Social Tees, In Our Hands Rescue and Animal Haven.

Finding families for homeless pets is a core part of Bark & Co.’s mission, meaning adoptable dogs are in attendance at all of the brand’s activations, from its anchor event, Barkfest, to partner events and beyond. In addition, the brand donates 10 percent of all profits to dog shelters across the country.

“We want as many dogs to get adopted as absolutely possible,” says Suzanne McDonnell, chief revenue officer at Bark & Co.

According to McDonnell, the brand is experiential by nature, from creating monthly moments when subscribers receive their Bark Boxes, to enhancing relationships between dogs and their owners.

“We’re all about dogs and making dogs incredibly happy, but really serving relationships between pet parents and the pups… so we’ve probably been doing experiential ever since we started,” says McDonnell. “Our mission is to drive more ‘pawesome’ moments between pups and pup parents so it’s all about the experience.”

Bark & Co.’s experiential nature certainly wasn’t lost on us. As dogs of every variety dashed around the room chasing toys, sniffing new territory and looking for a good ear scratching, the experience was nothing short of pawfect (yeah, we said it). Considering all the excitement, the handful of doggy accidents requiring some cleanup were to be expected, but pets donning apparel like tutus, leather jackets and “Adopt Me” kerchiefs more than made up for it.

Such is a day in the life for Bark & Co. employees. From “yappy hours” to “open bark nights” to the countless canines wondering around the office, the brand lives and breathes its mission of celebrating the relationships between humans and their pets. And with the brand’s social media platform, BarkPost, in full swing, sharing those moments is a breeze.

“We’re more than just the box,” says McDonnell. “We’re really building a community and we realize that our community has grown—the way they support our event marketing initiatives, as well as how they communicate with us. They’re always submitting content and sharing with one another… It’s a hugely social audience.”

A branded photo engagement at Barks & Baristas served as a confirmation of the Bark & Co. community’s desire to share, with plenty of attendees participating in the experience and subsequently sharing it online.

Even as we (grudgingly) left the fur-filled event, we had an impromptu shareable experience of our own to enjoy. Before the doors closed upon stepping onto the elevator, a pack of adventurous canines jumped onboard with us, apparently ready to take on Manhattan. It was a classic “New York moment” as one man put it, but more than that it was a glimpse into the kind of joy pets are capable of delivering to their human counterparts. Pawesome indeed.