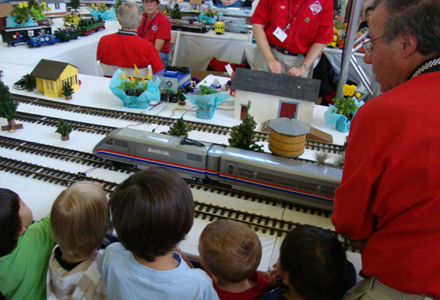 Amtrak Pulls Out All the Stops on National Train Day

Amtrak marked its fourth annual National Train Day by kicking off a four-market tour on May 7 that celebrates the anniversary of the first transcontinental railroad and, this year, the brand’s fortieth anniversary.

The celebration kicked off in New York City the night before the tour and featured a benefit for the charity partner, Boys & Girls Clubs of America, with a concert by Gladys Knight and select member of the Boys & Girls Club. The next day, Amtrak sponsored official events in Chicago, Los Angeles, Philadelphia and Washington, D.C. The events were free and featured live entertainment, interactive and educational exhibits, kids’ activities, model train displays and tours of Amtrak freight and commuter trains, and notable private railroad cars.

To keep it local, each event featured a State Partnership Display with info about how the brand provides specialized service to the area. Also, each city had specially designed feature events. In Chicago, the brand focused on the Hispanic community with a historical look at the Mexican community’s contributions to the railroad during World War II. Los Angeles had exhibits on the contributions of Chinese workers to the development of the railroads and to the California Missions that lined the rail routes. In Philadelphia, the brand created an exhibit about the African-American Great Migration from the South to the Northeast, Midwest and West via passenger trains during the early 20th century. The Washington D.C. event featured the history of the B&O Railroad’s contributions to the Union’s victory in the Civil War and served as the kickoff for the brand’s national celebratory tour for its fortieth anniversary, which will consist of two locomotives, three renovated baggage cars displaying historic advertising, uniforms, photos and other memorabilia, and an Amtrak Bistro car to be used as a retail center and for various exhibits.

“Our objective is to raise awareness of rail travel and the benefits that rail has provided throughout its history,” David Lim, cmo at Amtrak, told Buzz. “For us, National Train Day is our best effort to bring our event marketing to a national level.” Agency: MATTER, Edelman Sports & Entertainment Marketing, Washington D.C.