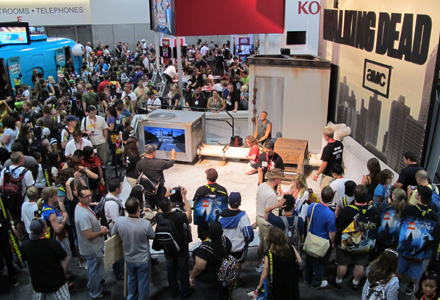 Banking on the same success its Comic-Con activation had last year when AMC launched its zombie series “The Walking Dead,” the network returned this July with a replica set from season one as it gears up for the return of the series in October. The set depicted the Merle Dixon character chained to the Atlanta department store rooftop moments before he cuts off his own hand, while the zombies attempt to push through the door. Attendees were given the chance to be in Merle’s shoes by putting on a set of handcuffs and pretending to cut off their own hand for a photo-op. Video clips of the scene aired alongside the experience.

“This was about reigniting the passionate fan base and getting them to start tweeting, visiting our website and reengaging them in the show and the AMC brand, so that when we do start to premiere it’s a huge roar,” Theresa A. Beyer, vp-promotions and activation at AMC, told Buzz. “It became a moment they could capture with their cell phones and capture with their camera. These fans are the ground zero for commentary and conversation. They’ll push out the conversation for us.”

Attendees were also encouraged to post their photo to Twitter to be entered in a sweepstakes to win a trip for two to Los Angeles where they’ll have a zombie head look-a-like bust custom-made for them. They could also grab an autograph with the cast and producers, as well as the creative visionaries of the series, Tim Bradstreet and Frank Darabont. While fans waited to partake in the action, a special video reel of exclusive season two scenes ran on a loop. Agency: Bottlerocket Marketing Group, New York City.