Alzheimer’s Association Gets Into Gear with Cycling Relay - Event Marketer 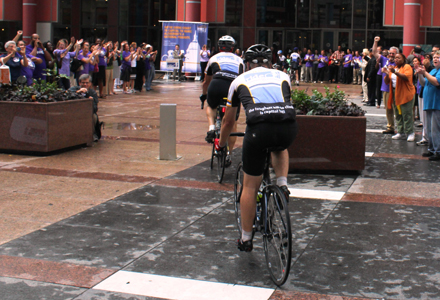 Alzheimer’s Association Gets Into Gear with Cycling Relay

To raise awareness about Alzheimer’s disease and to collect signatures on a petition asking Congress to make the disease a national priority, 55 Alzheimer’s researchers are spinning their way across the country in a cycling relay. The 67-day, 4,500-mile ride, called the Alzheimer’s Breakthrough Ride, launched on July 17 in San Francisco after a ceremonial kick-off a week earlier at the Alzheimer’s Association International Conference in Hawaii. The relay has proven so successful the association has doubled its original goal of 50,000 signatures to 100,000.

The Breakthrough Ride will pass through 13 states and 65 congressional districts before culminating on World Alzheimer’s Day, Sept. 21, on Capitol Hill. There the association and researchers will present the 100,000 signatures collected along the route to Congress in hopes that it will pass the Breakthrough Act to increase funding for research.
The tour is a hybrid of a non-profit cycling event and a multi-market mobile tour. Three vehicles, including a lead vehicle, a “caboose” and a branded RV called the “Pony,” which serves as an oasis for the riders, travel with the pack, who ride the relay segments three to four at a time. In addition, an advance vehicle travels a day or two ahead of the riders, and a crew of four accompanies them.

At 16 signing events along the route local association chapters help gather a crowd and put together a short program. Volunteers with iPads encourage people to sign the online petition at alz.org/breakthroughride, which also features videos from the relay, updates and a blog. Attendees can try their skills to win prizes playing Brainia, a Skee Ball-type game, and cheer on the Breakthrough riders. Besides the planned events, impromptu events have also taken place at schools, parking lots, hotels and other spots where the riders capture the attention of passersby. Agency: Eventage, New York City.