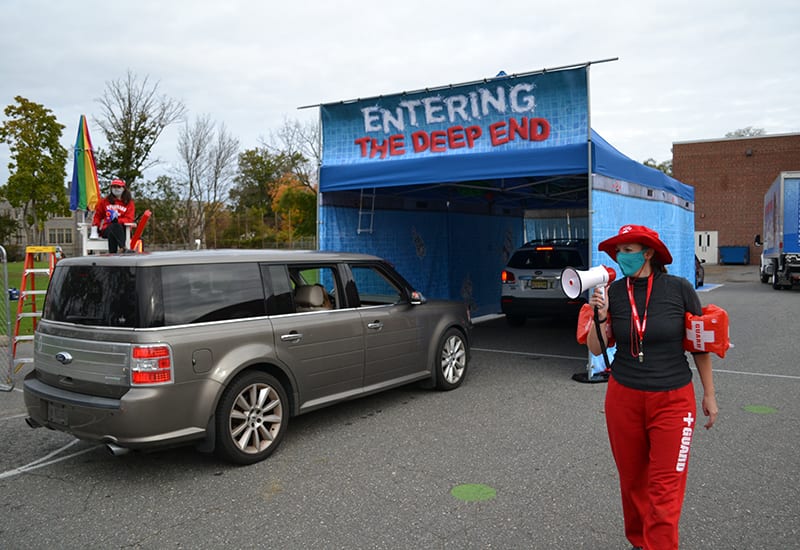 The pandemic has left many kids feeling trapped for the better part of nine months, so to offer them a much-needed escape and promote the latest novel in Jeff Kinney’s “Diary of a Wimpy Kid” series, publisher Abrams Books launched a drive-thru pool party-themed experience that traveled to 17 cities along the East Coast in 18 days in a custom-wrapped van and box truck.

Abrams partnered with nearly 20 independent bookstores to host activations across Jeff Kinney’s The Deep End Drive-Thru Pool Party Tour, which promoted “The Deep End,” a novel about a family’s cross-country RV trip and their encounter with a number of pools along the way. Throughout the tour, the book’s theme was brought to life via a series of playful vignettes offering family-friendly fun for up to 250 cars at each event. The price of entry: one copy of “The Deep End.”

Upon arrival at the activation, families were directed to tune their car radios to a dedicated channel featuring a pool party-themed playlist and messages from Kinney throughout. They then checked in with bookstore staff at a tiki hut, where they were given a “seek-and-find” card and encouraged to search for each of the pool-themed objects on the card as they drove through the event. At the first stop, attendees engaged in photo ops with life-sized “Diary of a Wimpy Kid” character sculptures crafted from pool noodles. Next, they encountered a choice of several book-themed prizes randomly selected for them by a spinning 10-foot computerized prize wheel.

The journey continued as families met a “bad lifeguard” who sprayed their cars with water if they didn’t listen to the pool rules before entering The Deep End, a 26-foot tent designed to look and sound like driving at the bottom of a pool. Finally, the crowning moment arrived as attendees drove onto a pad designed to look like the top of a pool where Kinney was waiting to hand them a signed copy of “The Deep End” using a nine-foot pool skimmer, and pose for a photo. As attendees drove away, the author tossed water balloons at their car.

“Jeff Kinney and Abrams are constantly searching for new ways to engage ‘Diary of a Wimpy Kid’ fans and provide them with a true one-of-a-kind, ‘Wimpy Kid’ experience,” says Hallie Patterson, director-children’s publicity at Abrams Books. “The readers of the ‘Diary of a Wimpy Kid’ books are primarily kids ages eight to 12. This tour was designed for those readers and their families. Jeff’s legacy readers, who have been reading his books since they were kids and are now in their late teens, often attend his events as well, so our challenge was to create an experience that could be enjoyed at all ages… and this year in particular required major out-of-the-box thinking—a traditional book signing event was not going to cut it.” Agency: Switch, St. Louis.