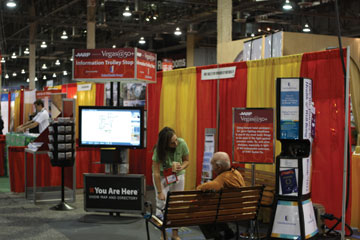 THERE WAS A WHOLE LOT OF SHAKIN’ GOING ON at Vegas@50+ the annual AARP convention held this year in Las Vegas Oct. 22-24. Exhibitors filled the Sands Expo and Convention Center informational seminars educated attendees about financial security and health care and early morning workouts got hearts pumping as did the dance parties concerts and celebrity speakers. That was all business as usual for this annual extravaganza which has been growing steadily since its inception as a member event in 2001. (The only break occurred in 2005 when Hurricane Katrina hit New Orleans canceling the event.) But this year AARP went digital with a virtual experience social networking sites an on-site TV show and bloggers proving that today’s 50-plus generation is turned on and tuned in to what’s hip including the Internet.

“We are very cognizant of the ascendancy and the use of the Internet for our folks so we created a virtual event to parallel the actual one ” said C.B. Wismar vp-events at AARP. “We wanted to create an environment that is not only more engaging more interactive and which builds a stronger sense of community around the event—we want it to be accessible 24/7/365.”

The virtual experience called You Are Here and developed by digital media technology company MarketArt lives on AARP’s website aarp.org and served as a pre-event primer offering links to a map of the exhibit show floor speakers entertainment and other activities. It will stay live for the entire year and three months after Vegas@50+ will transition into AARP’s next scheduled event which will take place next year in Orlando. Besides the website the You Are Here system was distributed throughout the Sands’ 360 000 square-foot venue on touch-screen stations that helped attendees find their way to exhibitors products and services. It also extended the exhibitors’ reach and attracted traffic to their booths. A “crumb trail” tracking system allowed attendees to enter their badge number to see where they went and find key points of contact for each company they visited.

“Any social media is valuable especially at a convention like this ” said Flora Ward manager of community outreach at Walgreens a platinum-level sponsor of the convention. “There are so many things to see and do that anything that helps attendees navigate their way through is so important. We were fortunate that we had such a large presence and I hope people were able to find us easily but for some of the smaller booths it’s valuable component.”

You Are Here also linked to a Facebook page a Twitter account and an interactive online community of people and bloggers who are tuned in and connected to the happenings. “We’ve reached out to folks in a much different way this year ” said Jason Weinstein manager of national events at AARP. “The number one growing group on Facebook is the 50-plus demographic. It’s the jumping off point for this year. More than 85 percent of our attendee base is computer users. There’s a level of trust that goes along with our brand and the message so if we’re on Twitter and Facebook maybe it’s not all that bad. We’re trying to introduce people to the opportunity in a safe environment which is AARP and a national event.”

An on-site TV show Channel 50+ also was new broadcasting programs filmed daily throughout the conference on closed-circuit TVs and on the AARP website. The programs featured exciting tidbits from the event and excerpts from the presentations; for example Irish tenor Ronan Tynan’s speaking and singing session or a day at the nearby Las Vegas Motor Speedway. The convention attracts a largely affluent college-educated audience with most attendees between the ages of 50 and 65. The average age of AARP members is 63 which Wismar says hasn’t changed much in the past few years. They boast an average household income of just over $91 000 and nearly half of AARP members are still working.

This tech-savvy demo is an attractive target to marketers who pay big bucks to sponsor their annual convention which includes naturally a technology café and a technology learning lab. Their support subsidizes the cost of the three-day event which this year remained at $25 for members and $35 for non-members which is a good deal in any age digital or otherwise.