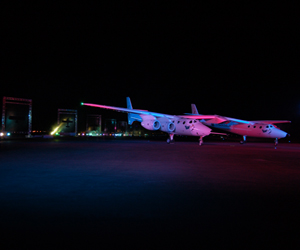 This is the story of the maiden voyage of Virgin Spaceship Enterprise and how the company known for being ahead of the curve showed 800 VIPs and members of the press on Dec. 7, in Mojave, CA, that it wasn’t restricted by anything—even the curvature of the Earth.

As the first commercial “spaceline” celebrating the long-awaited unveiling of the first-ever commercial space plane, Virgin Galactic had no one to compete against. But that didn’t stop Sir Richard Branson from once again proving that when it comes to spectacular daredevil stunts and innovative feats of publicity, no one can set the bar higher.

“One Virgin staffer told us, ‘This is the biggest thing we’ve ever done, so it has to blow socks off,’” Justin Hersh, founder and ceo of Alameda, CA-based handling agency Group Delphi said. “We had to out-Virgin Virgin.” (No pressure, guys.)

The challenges began with the venue. In addition to the event’s historical significance, the reveal was held in the middle of the Mojave Desert, a harsh and unforgiving environment at its best. There was nothing in the way of amenities or infrastructure, except for the concrete pad just off the south end of the runway at Mojave Air and Spaceport. In addition to the location and time of year (in the winter, the Mojave dips below freezing at night), the Group Delphi team had to overcome an infrastructural blank slate while respecting the fragile desert environment. Here’s how they did it:

COUNTDOWN
From the first meeting, which was only two months before the event, the pace of work was frenzied. Group Delphi ordered custom party domes from China to give the site a moon-base look and feel and provide a heated party zone after the press conference. The conference itself was in a huge clear-sided tent that allowed the desert’s myriad colors and desolate sand-scape to provide the perfect backdrop for the presenters. All the power for the site came from five 400-horsepower generators and there was more than five miles of cable running along the runway alone, powering eight 40- foot-tall screen-printed, lightweight fabric icons that documented the history of flight from Daedalus through the Wright Brothers to Spaceship One, all pointing the way to VSS Enterprise’s appearance at the end of the runway. With so many unpredictable environmental elements to deal with, contingency plans became a critical part of the planning process. For instance, if the wind had risen to above 35 knots (about 40 mph), the space plane couldn’t come out of the hangar because it is so light it might go airborne (it was unfueled for safety). Luckily for the attendees, it stayed below that threshold (for a while, anyway—more on that later).

LIFTOFF
The guests arrived at the nearby Mariah Country Inn at noon on event day. Some drove, but most took advantage of the shuttle coaches from Los Angeles. At the Inn, the VIPs and customers (people who already paid $200,000 for a ride into space) registered in a private lounge. Soon, all 800 guests were loaded into coaches for the short ride down the road, through a security checkpoint at a chain link gate and into what appeared to be a no man’s land just outside the airport.

As the coaches crept down the road-turned-runway, the event site rose out of the desert, lonely and alien-like. The icons presented themselves first, towering against the horizon like monoliths left by some advanced civilization thousands of years ago. The domes appeared next, lit from below with blues and purples. Against the crystal clear desert sky they seemed otherworldly, surrounded by nothing but sand and scrub brush. Finally, the press tent rose up behind and between the domes as the busses headed that way. The wind howled as everyone stepped off the coaches and hurried to the shelter of the waiting press tent, grateful to get out of the cold, after only a spare few seconds outside. Drinks, wine, beer and champagne were immediately available to warm guests’ insides, while exclusive Virgin Galactic gear was distributed, including much-needed warm jackets, caps and gloves, provided by Puma (no you can’t have ours).

As the guests got acclimated to the chilly weather and chose their seats for the press conference, and as the high-profile VIPs arrived in their private planes, the sun started to set over the snow-capped mountains to the west and the light show began. At the height of the desert’s phototheatrics, it started to rain. The deluge pounded the plastic tent with deafening power for about 20 minutes, bringing the temperature down another five degrees before letting up to reveal a black sky, filled with stars that seemed appropriately close for the beginning of the event. The speeches were as expected, with the engineering team receiving well-deserved thanks, along with the paying customers. Branson, Governors Bill Richardson and Arnold Schwarzenegger all made suitably well-received remarks, but the crowd was on pins and needles the whole time, waiting for the main event. When the anticipation had built to fever pitch, finally the press was allowed outside to set up for the reveal. They gathered on and around a dais, with video and photographers jockeying for position.

Meanwhile, the other guests gathered along the edge of the tarmac, leaning into the wind like penguins in the Antarctic winter. Boom! The first icon blazed into life as high-intensity spotlights (designed by Chicagobased Lightswitch) lit the stark black silhouette of Daedalus in flight, wings flared wide, followed by another booming sound cue and another icon. And another and another as the music built to the peak of the crescendo and suddenly, in ultra-violet blue, VSS Enterprise appeared, looking tiny at the other end of the runway. As she crept closer, she grew larger, suspended underneath the Virgin Mother Ship (VMS) Eve, the same launch plane used for Spaceship One. At long last, she arrived in full white light and larger than life.

AND HOME AGAIN
After everyone had had their fill of video and pictures with the space plane and the frigidity of the desert wind, they headed back inside for drinks and much-needed hot hors d’oeuvres and soups. They crowded under huge propane heaters gushing about the impressive reveal and trying (with varying degrees of success) to keep warm. As the party approached midnight, the weather got colder. It started to rain and hail all at once and the decision was made to evacuate, for safety’s sake. Not long after, the State Police closed the roads out of town and the hotels that weren’t already sold out, quickly did.

And so, in a finale no one could have planned, the desert ended the event in spectacular fashion, with reported 110 mph winds uprooting the (by then long-abandoned) press structure, despite its k-rail anchors. The event garnered about $7 million in media value, according to Susan Newsam, head of marketing production at Virgin Galactic, from more than 1,700 news articles that were generated, which was the primary measure of success for Virgin, she said. They even got a thank you note from Schwarzenegger, who said he had a wonderful time and was glad to have been a part of the experience.

“We certainly met all our objectives,” says Newsam. “It was wonderful to get all our customers, agents and press who were able to come out there to see the spaceship and where it was built and conceived. As far as Virgin is concerned, we certainly achieved everything we wanted to achieve.” Anyone who would like to contribute to the “Send EM to Space” fund can send donations directly to us in Norwalk, CT, in care of… —Kenneth Briodagh EM