7 New Ways To Use Twitter In Events – Event Marketer 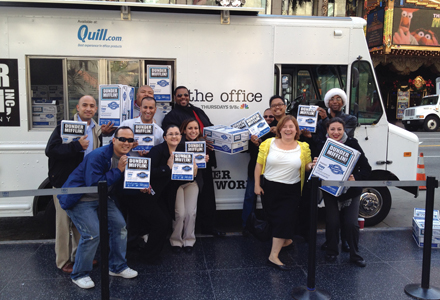 Whether you’re activating a consumer event, a trade show or a conference, Twitter can be a highly effective way to generate excitement, increase awareness and keep in touch. But that’s hardly all the social media tool is capable of. Today, event marketers are pioneering ever more innovative ways to use the power of Twitter to broaden reach, boost consumer engagement, leverage strategic partnerships and drive trial.

Read on for seven fresh ways to transform Tweets into tactics.

1. To route a mobile tour

If your goal is to build awareness and generate trial, as it was for the SoBe Study Break tour, using your Twitter handle as a social routing tool is a great way to do just that. SoBe’s two-week tour this past December hit 42 campuses across the Midwest, West and Southeast just as students were in the midst of finals week. The brand tweeted to student groups to determine which campus stop-off points—such as rec centers, libraries and collegiate athletic games—would generate the most traffic. The strategy worked: SoBe sampled more than 76,000 bottles over the two-week period (Agency: Motive, Denver).

2. To announce your next stop

Once you know where you are going, you can use Twitter to let people know where to find you. JetBlue last year created a mob scene when it announced via Twitter that to celebrate its 10th anniversary, it would be giving out free round trip tickets at three undisclosed locations in Manhattan on a certain date. “We’re in Manhattan today giving away tickets starting at noon. Ready to come find us? http://bit.ly/JB10NY #JA10NY,” it tweeted. The tickets were gone within 20 minutes of each announcement.

More recently, to generate buzz for its Dunder Mifflin Paper Tour, Quill.com in December set up a Twitter feed, @DMPaperTruck, to let people know where its converted food trucks distributing free reams of its new line of Dunder Mifflin-branded paper were headed. The three-day tour, which took place in Chicago, Los Angeles and New York City, engaged fans in high-trafficked locations such as train stations and plazas.

“As soon as the story [about the new paper brand] launched, we created a Twitter account and started building a following,” says Aviva Schwartz, director of marketing for consumer acquisition at Quill.com. “People would be waiting at the next location to get their free ream of paper and have their picture taken with the truck.” The Twitter feed generated nearly 1,200 followers during the three-day tour (Agency: Kicking Cow, St. Louis).

3, For photo and video collection

People love seeing pictures of themselves and their friends, especially teens and college kids. SoBe’s Study Break Tour capitalized on that by activating a live tour Twitter feed on which the students could post Twitpics and Twitvids, then rewarded the camera hounds with free SoBe.

Likewise, to promote its new series “The Walking Dead,” AMC in July had attendees at its booth at Comic-Con become its Merle Dixon character by putting on a set of handcuffs and pretending to cut off their own hand for a photo op. Those who posted their photo to Twitter were entered into a sweepstakes to win a trip for two to Los Angeles where they would have a zombie head look-alike bust custom made for them. “This was about reigniting the passionate fan base and getting them to start tweeting, visiting our website and re-engaging them with the show and the AMC brand, so that when we do start to premiere, it’s a huge roar,” says Theresa Beyer, vp-promotions and activations at AMC (Agency: Bottlerocket Marketing Group, New York City).

4. A channel for celebrity endorsement

When Luster Products, a line of African-American personal care goods, last September held a three-city mall event to demo its Pink Brand Smooth Touch hair products, it tapped celebrity endorser LeToya Luckett’s Twitter following of 300,000-plus followers. Regular tweets, such as “See you soon Chi-town! http://on.fb.me/SmoothTouch,” generated excitement and attendance at the events. In a personal video invitation she encouraged consumers to pre-register and attend the upcoming mall event. She also drew visitors to Luster’s social media accounts by inviting consumers and fans to visit the sites for more information.

At the malls, attendees received complimentary hair consultations from Luster’s international design team, free mini-makeovers by celebrity make-up artists as well as raffle prizes and giveaways. By using Twitter as a platform to communicate, Smooth Touch raised awareness for the event and its celebrity endorser (Agency: LimeGreen, Chicago).

To generate word of mouth for its new Alpha Khaki pants, Dockers last September held an Alpha Fan bar crawl in five cities that dared guys to “drop trou” to win a free pair and be entered for a chance to win a grand prize. Participants who tweeted “Dockers just made me an Alpha Fan at [bar name]#dockersalphafan,” earned a second entry into the sweeps. If a friend retweeted the message, they received a third entry. Games and free tattoos added to the fun (Agency: Grow Marketing, San Francisco).

SoBe, likewise, used Twitter to issue challenges to its followers in a “What Would You Do For a SoBe? Contest. Students completed tasks like singing love songs to strangers, balancing a SoBe on their heads and other such antics, then visited the SoBe truck with proof in hand to retrieve prizes.

When Macy’s launched its summer Chefs A-Go-Go tour, a national food truck tour to drive awareness of its roster of chefs and to teach consumers how to cook and shop like a master chef, it served up tasty samples such as Michelle Bernstein’s mojo guacamole or Emeril Lagasse’s “Babamas Foster” to attendees. In addition, those who “liked” Macy’s on Facebook or followed the retailer on Twitter received a gift at each food truck stop. They also could follow the chefs who tweeted live from the food truck using the hashtag #macyschefs.

“Macy’s looks at special events as entertainment, and any time we can do something a little out of the ordinary, we like to do that,” says Amy Kule, group vp in charge of national special events at Macys.

Twitterfalls and big screens running twitter feeds at events add a dynamic element to any activation or display. The Cheeses of France pop-up Twitter café, which took place this past October in New York City and celebrated French cheese as part of an everyday diet, kicked the concept up a notch.

In addition to public wine and cheese samplings and five display cases filled with “fromage” for purchase at wholesale prices, people were encouraged to Tweet from the venue, and their live tweets were projected onto a wall in the room. A moderator was on hand to keep an eye on the postings. “People loved seeing their tweets and responses,” says Jean-Marie Sepancy, director of strategic services at Jaffee & Partners. And, quelle surprise! The tweets brought in TV host Kelly Ripa, who happened to be in the neighborhood (Agencies: Jaffe & Partners and Moderne Communications, both New York City).