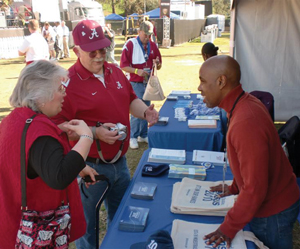 There are roughly 307,006,550 people living in the U.S., but who’s counting? Well, the U.S. Census Bureau, for one, which measures the U.S. population every 10 years. And to make sure Americans return their census forms, especially traditionally under-counted populations such as minorities, children and low-income people, the bureau in January launched a $133 million national advertising campaign that includes TV, radio, print, online and outdoor ads in 28 languages to boost participation rates in the effort. A major part of that campaign is the Portrait of America road tour, where citizens learn about the census and its impact on their community and lend their pictures, voices and stories to the effort.

The four-month tour, which runs through April 13, is part of the largest civic outreach and awareness campaign in U.S. history. It consists of 13 vehicles that will stop at more than 800 community gatherings, celebrations and sporting events, logging more than 150,000 miles and reaching an estimated 18 million people with the message that the Census is easy, safe and important. The goal is to get people to complete and mail back the form.

“People get to take a closer look at the actual 10 short questions that are on the form, but also the rationale—why we ask those questions—so they can understand there’s a reason and a purpose and a benefit to them to respond,” says Michael Cook, Census Bureau spokesperson.

Census data is used to reapportion congressional seats and assure proper district representation in all levels of government. It helps determine how more than $400 billion in federal funding each year is distributed to state, local and tribal governments and it guides local planning decisions, such as where to build new roads, hospitals, schools and more. There’s a tax-saving benefit, too. Every percentage point increase in the mail-back response rate saves taxpayers $85 million spent on sending census takers to non-responding households for in-person interviews.

No one actually fills out the form at the experience, but at each stop attendees can view the questions, discuss them with a census employee and practice writing, then erasing, their answers on large Plexiglas panels. Attendees also can contribute photos and audio messages via interactive kiosks to the Portrait of America project to explain why “I count!” and view messages from other road tour participants also on the kiosks.

More than 200,000 partners, from major sponsors such as Best Buy, 3M, BET, CMT, Google, MTV, Sprint, Telemundo, Sesame Street and Valero Energy, and smaller regional supporters join in at the stops and emphasize participation to employees, customers and their communities. Emissions from the tour will be offset by carbonfund.org, which will donate carbon credits to offset the tour’s estimated 202.8 million metric ton carbon footprint.

Each vehicle has a name that helps educate people about the Census Bureau. The national vehicle, dubbed “Mail It Back,” offers a visual, interactive representation of the 10-question census form. The regional vans, with names such as “Representation” (Atlanta region) and “Democracy” (Boston) serve up a similar experience. Citizens can track the tour in real time through GPS technology and via daily social media postings on Facebook, MySpace, Flickr, YouTube and on the 2010census.gov interactive map. Each vehicle has Twitter handles for on-the-road updates—Atlanta’s is @representat10n; Boston, @10democracy. The handle for the national tour is @10mailitback. People can also follow the tour at @2010portrait.