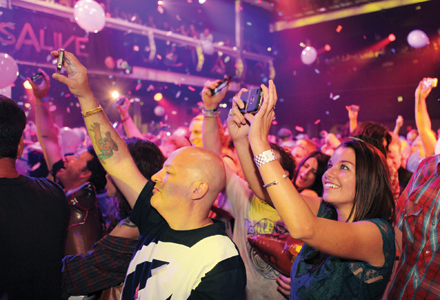 To drive awareness and trial of its new Chromebook, a personal computer that runs on Google’s Chrome OS operating system, Google this summer lent the laptops to travelers flying on Virgin America between its home airport in San Francisco to either Boston, Chicago O’Hare or Dallas to use in flight, then return when they land. They could also try out the computers at kiosks located in the airport. The company also placed Chromebooks in rooms at Ace Hotels. The Chromebooks were loaded with an app, created with the hotel, which informed guests of things to do and places to visit while they were in town (MKTG, New York City, handled).

“We didn’t want the experience to be too brief or too typical,” says Heaven Kim, product marketing manager at Google. “At the end of the day, a web browser is a core part of people’s computing experience. If they start using it, they realize this is true. Travelers are a good market because they are open-minded and in need of something like this, but they are not the main target, which is anyone who uses the web intensively. This provides users a good experience with the product in the right context.”

To promote the launch of the LG Thrill 45, the brand’s glasses-free 3D Smartphone, LG Mobile put the phone in the hands of a select group of attendees at a Jane’s Addiction concert. Some 1,500 people attended the 70-minute event, which took place last July at Terminal 5 in New York City’s trendy Hell’s Kitchen neighborhood. More than 100 attendees selected by LG and the band, including ticket holders, media, bloggers, influencers and NYU film students, used the handset to capture 3D video footage of the concert. The concert also streamed live in 2D on YouTube to millions of viewers.

The amateur in-concert photographers received a brief training session on the phone and its capabilities shortly before the show began, then shot what they chose to highlight. Jane’s Addiction band members also used the phone to shoot 3D video on its road tour.

The stage set was specifically designed to highlight the phone’s 3D quality with a double arch of truss loaded with lights and lasers that spotlighted a fabric pinwheel, giving it the appearance of spinning. A balloon drop of regular balloons as well as Mylar animal shapes and clear latex balloons with flashing green and blue LED lights inside and confetti cannons added to the 3D effect (Momentum, New York City, handled).

“The event was designed to not only attract attention and create a lot of buzz about the device, and to have people experience it hands-on at the event, but also communicate to those who were at home or walking into an AT&T retail store the power of 3D, the ability to create, enjoy and share it wherever you are,” says Tom Carroll, marketing manager at LG. “We wanted to show consumers that 3D isn’t a gimmick and convince them that content, whether user-generated or active content out there on the web, is easy for them to create on their own and enjoy. Seeing is believing, and 3D is something that needs to be experienced.”

And, finally, what better way to get guys into your pants than to literally have them “drop trou” and try yours on for size. That’s what Dockers did on Sept. 15 in a bar crawl in five cities—Chicago, Los Angeles, Miami, New York and San Francisco—to generate trial of its new Alpha Khaki pants.

Dockers sent brand ambassadors into each bar to ask guys—or girls—to drop their pants and answer trivia questions for a free pair of Alphas, a new style of khakis with the rugged look of jeans and made with a slim fit, lower rise and heavier weight fabric. Those who participated were entered to win an Ultimate Home Entertainment package consisting of a 60-inch flat screen TV, surround-sound system, La-Z-Boy recliners and mini-fridge. Games and temporary tattoos added to the fun, and radio vans were on-site in at least one location per market.

“There is no better way to change perceptions than to have men actually wear this product,” says Jen Sey, svp-global marketing at Dockers. “We felt it was important to go to the places where men are, in environments where they are having fun—watching sports—to make it easy and relevant for them to interact with our brand. Showing up in unexpected ways where our consumers are makes connecting with them one step easier” (Grow Marketing, San Francisco, handled).  EM