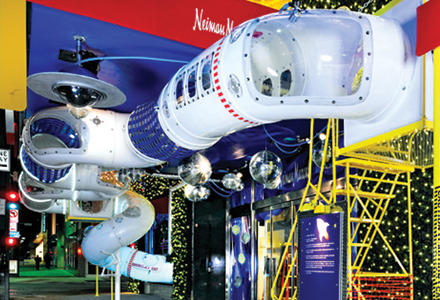 Department store holiday windows have traditionally regaled kids of all ages who ooh and aah at their Santa scenes and gift displays. Last year, however, at the Neiman Marcus flagship store in Dallas, not only could they ogle the windows, for the second holiday season in a row, they could actually participate in the story as they climbed into tubes and crawled through the set. This super experiential window certainly has raised the bar when it comes to holiday window displays, but New York City retailers have embraced the high-tech and experiential as well, animating their store fronts with 3D snowflakes, computer imagery and other interactive features. Come join us on a holiday stroll from Texas to New York where from high-tech and high-fashion to the traditional with a twist. We think you’ll like what you see.

NEIMAN MARCUS, DALLAS
This luxury retailer has taken the concept of window dressing to a whole new level with a mini theme-park approach that had kids climbing through a fantasy space where Santa’s sleigh was a rocket and his elves were dancing, weight-lifting robots. The kids entered the “Big Encounters of the Little Kind” experience through a 200-foot crawl tube that was accessible from the sidewalk and outfitted with more than 75 viewports so they could “live” the story told in the window. Kids with cell phones could text a number to control one of six special effects inside the display and use camera phones to place themselves inside space scenes. Video monitors kept track of the action. The project required a year of planning and a team of painters, sculptors, lighting technicians and computer programmers as well as the help of the Big Brothers-Big Sisters programs of Dallas, who decorated 800 stars in the celestial scene.

MACY’S
The first department store to use mechanical figurines in its Christmas windows back in 1899, this year the six windows on Macy’s Broadway side took a traditional but techy turn. Paper cutouts recounted the timeless tale of “Yes, Virginia,” the eight-year-old who wrote to the New York Sun in 1897 asking if Santa is real, but computers controlled the LCD screens, animation and sound that enlivened the miniature stages built into each window. The sets opened with rising curtains, scene changes and moving objects as a child’s voice narrated the story, until they closed and it was time to drift on to the next one. But it was all made of paper—more than 1,700 sheets in more than 100 colors that were cut, folded, formed and fitted by 14 artisans who toiled for 7,000-plus hours. On 34th Street, scenes inspired from the 1947 film classic “Miracle on 34th Street” showed the Macy’s Thanksgiving Day Parade with a float and band, Macy’s Santa and the final scene in the courtroom where the Santa’s letters overflow on the judge’s desk. Anyway you looked at it, this iconic New York store exuded Christmas.

LORD & TAYLOR
The modern mixed with the Victorian at Lord & Taylor where its Fifth Avenue windows depicted a “Share the Joy” theme in which mechanical figures turned and moved, doors opened and reindeer flew above the rooftop. Last spring, customers posted stories—of Dad taking the family to cut the perfect tree or Grandma sewing holiday dresses and the like—via Facebook and regular ol’ mail. Twelve of them, all set in New York City, came to life in the store’s four main windows around motifs like Haul Out the Holly, Our Gingerbread House and others. One window showed a townhouse where a garage door opened to reveal a snow-covered red car or a horse-drawn sleigh bearing the tree. Another scene in the townhouse portrayed figures in disco outfits decorating the tree; then it turned to become an old-fashioned scene. And so it went through the next three windows, where windows and doors slid open to reveal a couple raising a toast on Christmas Eve, cookies baking in an oven and an apartment dweller decorating the fire escape. The names of those whose memories were chosen were displayed, along with their letters, below each window.

SAKS FIFTH AVENUE
The Fourth of July may have its fireworks, but Saks this Christmas had bubbles and snowflakes aiming skyward on its façade where a two-and-a-half minute 3D projection musical light show, created by Iris Worldwide in collaboration with SP-Projects, both of London, took place every 10 minutes from 5:00 p.m. to 10:30 p.m. throughout the holidays. A custom-built six-projector system and video mapping created the visual effects that had snow gathering on ledges, bubbles emerging from the windows and the entire side of the building appearing to freeze over. The bubbles continued in its store windows that portrayed a stylish little girl named Annabelle who raids her parents’ curio cabinet and embarks on a fantasy ride to undersea kingdoms, the moon and enchanted lands accented, of course, with high fashion. In one scene a model in a short black dress and sparkly heels perches atop a wooden platform as tentacles spin atop a circus tent. In another, a futuristic outfit worn by Lady Gaga shared the stage with a moon-walking spaceship. The bubbles carried over onto the store’s shopping bags, limited-edition holiday gifts and in-store communications… and, no doubt, into champagne toasts hailing a successful selling season.

HENRI BENDEL
Henri Bendel offered a high-fashion take on The Nutcracker. The New York City Ballet collaborated with the high-end retailer where the main window recreated Act One of George Balanchine’s Christmas ballet with a twist. The display featured a six-foot-tall nutcracker, a tree adorned with mini monitors that played footage from the show and three ballerinas decked out in Swarovski jewels, fashion-forward gowns and tutus—one topped by a huge mouse mask. The theme continued inside the store where six ballerinas hung suspended from the ceiling. Uniting it all through a common theme was the store’s iconic brown and white stripes. After all, as the store window proclaimed, “All the best gifts come in brown and white boxes!”

BERGDORF GOODMAN
New ideas and old traditions mingled at Bergdorf’s where a “Wish You Were Here” theme took passersby on a magical mystery tour to exotic locales. Each of its five windows presented a different destination and a unique way of getting there—by sea, air, train or the imagination. One very red set, “The Scenic Route,” featured an antique caboose and a female in a flowered Oscar de la Renta frock departing Penn Station for who knows where. In “Full Speed Ahead,” a ship and miniature sailors set the scene for a blue-and-white striped Naeem Khan-clad mannequin on a fantastic sea voyage. Those wishing to join the trip could scan QR codes on several of the windows to view an online holiday gift finder and a video of the making of the displays. Others could submit “Wish You Were Here”-themed collages in the Holiday Windows Challenge, held Nov. 5 to 12. The retailer partnered with Polyvore, a creative-based social networking community, to host the competition. The winner, CJF Design, based in the U.K., was selected from more than 2,800 entries and received a $2,500 Bergdorf Goodman gift card, an autographed copy of “Windows at Bergdorf Goodman,” an invitation to the holiday window unveiling party and appeared on Facebook, Twitter and the Bergdorf Goodman blog, 5th/58th (blog.bergdorfgoodman.com).

BARNEYS
It was a foodie holiday at Barneys where its Madison Avenue windows featured superstar chefs in four windows around four themes: the Gals, with caricatures of Sandra Lee, Paula Deen, Ina Garten, Rachael Ray and, of course, Martha Stewart; the Bad Boys, with Mario Batali’s head on a platter and an apple in his mouth surrounded by Bobby Flay, Emeril Lagasse, Wolfgang Puck and others engaged in a food fight of lobsters, wine and corncobs; Revolutionary Stew, with trailblazers Jamie Oliver, James Beard and Julia Child depicted as clouds of steam above a bubbling pot; and Miss Illy, an homage to Illycaffe, created from recycled Illy espresso tins and foil and topped with an espresso machine headpiece, a coffee-scoop earring and a garland of 300 paper cups. The Italian coffee company offered complimentary espresso and cappuccino to shoppers on the store’s 9th floor and master barista Giorgio Milos made appearances throughout December. A side window offered portraits drawn by the children of East Harlem School of their favorite chefs—mostly their moms and dads—that were offered for sale and benefitted the school.

BLOOMINGDALE’S
Spare in its presentation, Bloomingdale’s Lexington Street fantasy windows may not have been mechanical, but they were moving in their simplicity. Holiday music provided the backdrop for nearly 100 digital screens of various sizes playing computer-generated animations of a magical, snowy-blue winter landscape that captured the spirit of Christmas. The windows invited shoppers into a “world of good,” a holiday of “hope, joy, promise, kindness and fun.” The retailer pledged its support to the Child Mind Institute, an organization committed to helping children around the globe, and encouraged shoppers to shop an online auction to benefit the organization. Sales of its holiday bear and storybook, which lined the window, also supported the group. A wish for a Happy Holiday “from our family to yours!” summed up the spirit of the season in a quiet but meaningful way.  EM