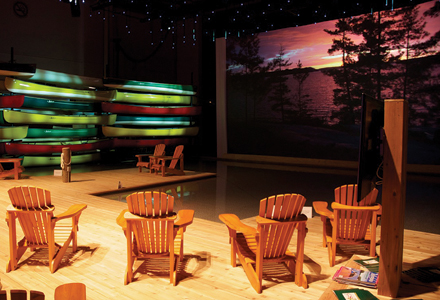 Inside the Experience Canada G20 Pavilion

When the G20 Summit hit Toronto June 25, the delegates were tasked with the big issues: the global economy, green energy and financial reform, to name a few. Canada Tourism had just one mission: to remind the world to “Think Canada” for tourism, business and investment. With this directive in mind, the Experience Canada Pavilion was born.

The Pavilion took up more than half of the Toronto Convention Center’s 40,000-square-foot space with three different interactive areas that each promoted Canada’s versatile economic marketplace. The messaging was clear and consistent throughout: Canada is open for business.

During the two days of the summit, more than 3,000 members of the international media visited the $1.9 million, 25,000-square-foot exhibition to relax, work on G20 coverage, conduct interviews and network with their peers. Only accredited and credentialed media were allowed inside.

The entrance greeted the reporters with several uniquely Canadian art installations, including a display of Canada’s most iconic symbol, 400 suspended acrylic maple leaves creating a tunnel effect for the path leading inside. Next up, visitors could choose from a series of three distinct spaces, each with its own mission in mind.

Northern Oasis
The first area was the Northern Ontario Oasis, which recreated the calm, back-to-nature feel of the province’s lakes region. Surrounded by 18-foot-high racks filled with canoes and kayaks, the centerpiece of the area was a gigantic 30-foot by 18-foot high-definition projection screen that played a series of serene images of sunsets and sunrises over various Canadian lakes for a backdrop so dramatic, some of the world’s media actually chose to broadcast directly from the Oasis.

To enjoy the scenery in comfort, dozens of Muskoka chairs (known as Adirondacks here in the States) were arranged inside the area’s shallow indoor “lake” where attendees could listen to crickets chirping and birdsongs layered with the sounds of other wildlife piped in. Water and wind completed the effect. Nearby, local craftsmen made artwork for display as a living example of Canada’s handicraft heritage.

The media primarily used this space as a hiatus and relaxation area, away from the hectic meeting schedule of the Summit, but in the end it proved to be the most photographed area of the Pavilion.

Urban Cityscape
The Cityscape was a complete 180-degree shift from the Oasis. It was all about Canada’s cities and how the nation’s business community is ripe for international investment and ready to do business with all comers.

Within the hi-tech landscape, guests were surrounded overhead by rolling ticker tape information streams and eight large suspended boxes running video promos and imagery about Canada’s financial sector. The architecture and low, club-like lighting was designed to be a symbolic representation of Canada’s position as a leader in innovation and financial stability.

The suspended structures were in and of themselves evidence of Canada’s industry and innovation. They were made of Christie Digital’s MicroTiles, a state-of-the-art digital technology that allows them to be used in several different A/V configurations. Sizzle reels, photo slideshows and infographics appeared on the towers and hanging structures. Interactive features, including a web-based information portal that allowed reporters to research and investigate Canadian companies and economic intel, highlighted Canada’s resilience in the face of the economic crisis and worldwide recession. The virtual Canada experience brought the whole urban area online for journalists to check out back at home or on-site at several web-connected stations around the exhibit.

The Bridge
Between the modern world and the wild was The Bridge, an information hub, food tasting zone and cocktail bar that connected the Northern Oasis to the Cityscape. The massive 50-foot-long bar featured Canadian foods prepared by top chefs, internationally recognized wines and beers and, via USB ports, distributed information about Canada to the international media. The bar was topped with a half-inch-think heavy acrylic coating over stunning images of Canada’s coast-to-coast offerings. For sports fans, The Bridge also featured a TV broadcasting the World Cup. Workaholics could also check out the live feeds from the G8 and G20 Summits to stay up to date on the latest developments.