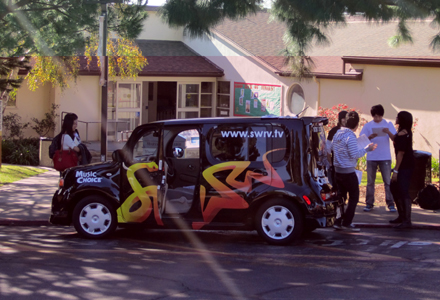 SWRV in December hit the road in a Nissan Cube to promote the SWRV interactive music video network in which viewers, not vee-jays, call the shots. Called the SWRV Space Mobile Tour, the effort gives consumers the chance to see what it’s like to introduce a music video, create and star in a video dedication and advocate to play their favorite music videos.

The tour will travel to eight cities in Arizona and California where the network is carried by Cox Communications, reaching its target 13- to 24-year-old audience at schools, colleges, retail stores, skate parks and Cox Solutions stores.

At each stop, brand ambassadors encourage consumers to interact with the network via a 40-inch LED TV screen located at the rear of the vehicle where they can upload user-generated videos on the spot for a chance to take over the network, text in their video dedications and instantly vote on what music video should air next. Consumers can follow the tour, which ends Dec. 22, on its SWRV.tv Facebook page.

“We think it is important to demonstrate to the consumer how fun and interactive the service can be,” Christina Tancredi, evp at Music Choice, which produces SWRV, told Buzz. “We felt that getting the message out through a program like this would be more effective than just running TV spots. SWRV is a social experience and people tend to be at these different environments with their friends, so it makes it more fun.” Agency: a.d.d. Marketing + Advertising, Los Angeles.