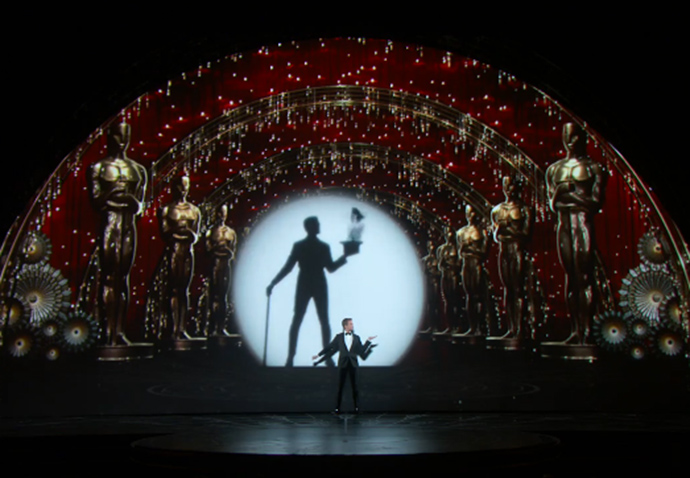 We’re back with another installment of best award show stage concepts, this time fresh off the 87th Academy Awards telecast—Hollywood’s biggest night. (See our picks from the Grammys, here.) Most tune in to the lengthy 2015 Oscars program for the suits, gowns and memorable acceptance speeches. We tuned in with an eye for the sets, staging and production techniques the industry will be talking about in the weeks to come. Here’s what we liked.

The set behind Adam Levine during his performance of “Lost Stars,” a Best Song-nominee from the movie “Begin Again.” It lit up like a starry night, thanks to hundreds of vintage-style filament bulbs hanging in varying heights in a canopy formation over Levine, who was situated on a circular platform. (Check out how industrial accents are trending in event design, here.)

The tear-strewn faces said it all. John Legend and Common’s performance of their Oscar-winning song “Glory” for Best Picture-nominated “Selma,” pulled audiences right into the heart of the historical drama. The set featured a build of the Edmund Pettus Bridge in Selma, AL. As the two artists performed, a chorus re-enacting the famous march, stepping one foot after another in slow-mo sync, made its way under the bridge canopy and toward the front of the stage, ending with a dramatic pause.

Lady Gaga’s tribute performance for the 50th anniversary of the “Sound of Music” was stunning—because of her voice, but also because the subtlety of the set that allowed her voice to shine. The design paid homage to the film’s opening scene with tall birch tree trunks, and orchestra members seated among them in shadows. In the spotlight: Gaga, in a silver princess gown with matching hair. (Check out how natural elements are trending in event design, here.)

Neil Patrick Harris’s hosting gig may have garnered mixed reviews, but the screen display for his opening number earned strong points. The movie montage aptly called “Moving Pictures,” incorporated 3D projection mapping, and brought some of Hollywood’s most memorable scenes to life. We loved the special effect “hat-trick” with Harris’ shadow revealing doves flying out of the top hat.

The Performance of “Everything is Awesome” for Best Animation-nominated “The Lego Movie” featured artists Tegan and Sara, The Lonely Island, Questlove, a Batman, a band of dancing construction workers and even a possum. It was energetic and over the top, but it was nice to see a contemporary dance number at the Oscars. Our favorite mid-performance moment: when the camera cut away to Oprah clutching an Oscar made of Legos.