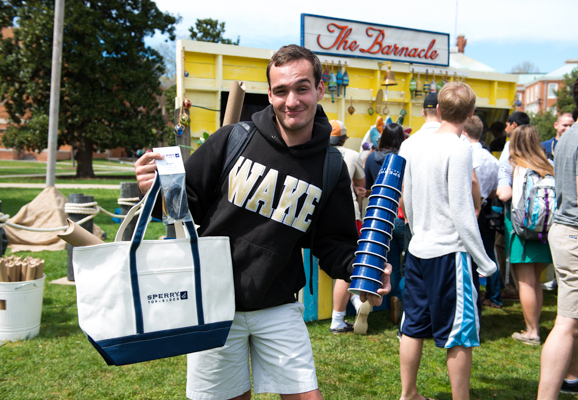 The results are in, along with some valuable social media lessons, from Sperry Top-Sider’s second Vacationland College Tour. The tour, which ran from March 27 to April 8, made day-long stops at four southeastern colleges, bringing with it a Social Bar, The Barnacle social- and prize-hub, contests, meet-and-greets, a photo booth, prize wheel and lawn games like croquet, Kan Jam and bean-bag toss. A highlight of each stop was a free concert during the last three hours of the day by Universal Music Group artists such as Manchester Orchestra, Sam Hunt and others.

The 2014 tour reached more than 75,000 students. The brand gained 3,547 new Facebook fans, somewhere between two to five times the number of new fans it typically receives on a daily basis. Five videos produced by the tour were viewed 2,028 times. The #SperryU hashtag was used 225 times on Instagram and 60 times on Twitter.

In addition, 6,328 people clicked on contest links for the two contests that ran during the tour: Battle of the Colleges, a month-long contest to boost school spirit in which Sperry gave away 30 pairs of shoes to the school receiving the most votes on Facebook; and the #SperryU Photo Contest, in which fans submitted photos on Instagram and Twitter to receive weekly shoe giveaways.

Following are the takeaways from all this social media activity:

1. Consumers love social media, but also love to be social in person. “It is so refreshing to go to an event and interact with our fans in person and see how much they value that,” says Beverly Antunes, digital marketing manager at Sperry-Topsider. “They were so excited to be socializing in real life with the brand.”

2. Have a rallying hashtag around the event. “People love to be onsite at events and tell their friends they are onsite having a great experience with Sperry Top-Sider, so we promoted the hashtag through all our communications online and in person,” Antunes says. Get the hashtag out early so when people show up they know which hashtag to use for posting photos.

3. Use Facebook event pages as a promotional tool. “We have over 500,000 Facebook fans, but not all of them care what the set list is at Wake Forest because they can’t attend,” Antunes adds. So Sperry set up Facebook events at the colleges and worked with event groups on-site at each school to help promote the event page. Once people RSVP’d, they received communication about the event such as when the band would perform and other information. “Facebook is important for getting people onboard and knowing about an event well before it takes place,” she says.

4. Instagram is tops for fan engagement. Sperry Top-Sider is a visual brand and the Vacationland experience provided a colorful backdrop for photos, so uploading photos to Instagram was a natural. “Instagram is the one social media platform that gets the most engagement for our brand,” Antunes says. “We got some mentions on Twitter with the hashtag, but it was a lot stronger on Instagram.” Agency: Revolution Marketing, White Plains, NY.