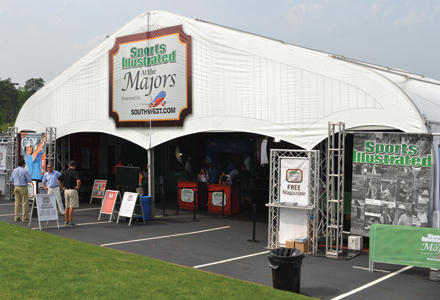 Anyone who has ever attended a golf tournament has seen the pristine white hospitality tents filled with food, fancy drinks and guests in khaki pants and pink polo shirts. The problem is, these exclusive enclaves typically are for VIPs only. This year, the Sports Illustrated Golf Group, which includes Golf Magazine, SI Golf+ and Golf.com, has replaced the cocktails and hors d’oeuvres with a more inclusive experience. The group, through a custom publishing arrangement with the U.S. Golf Association, still maintains a private tent at the U.S. Open. But its new take on the hospitality suite, which is outdoors and under a tent, is a working broadcast studio with three cameras and a stage where fans of all stripes can watch the editorial staff conduct roundtable discussions and live interviews, hear the inside stories of its award-winning photographers and even receive free golf lessons from SI’s stable of top 100 golf instructors.

The initiative, called Sports Illustrated at the Majors, launched on April 3 directly across the street from the Masters in Augusta, GA, and will travel to off-course settings at three more high-level events. During the U.S. Open, June 14 to 17 in San Francisco, it set up shop in Union Square Park, where it hoped to engage an urban crowd. At the PGA Championship, Aug. 8 to 12 in Kiawah Island, SC, it will be located in Freshfields Village, the hospitality center and shuttle bus drop-off point minutes from the Ocean Course. During the Ryder Cup, Sept. 27 to 30, which takes place at Medinah Country Club in the Chicago suburbs, it will be found at the city’s busy Navy Pier.

In today’s editorial environment, where web sites are filled with video posts and daily updates, the studio was an idea whose time had come. “We bring an editorial team of about 35 writers, photographers, editors and videographers to these big events, which are prime time for golf.com and si.com, where we are showing a lot of video,” says Jim Herre, managing editor at SIGG. “It has been a struggle to find studio locations. We would set up outdoors and it would rain. It just wasn’t good. So, I thought, why not build our own studio, and that was the genesis of SI at the Majors.”

SI at the Majors offers fans an inside peek into the knowledge and perspective of its editorial staff as it covers these major tournaments. It also provides advertisers looking to tap into the closed world of golf, especially at championship events, an avenue for off-the-course sponsorship.  “At big events like a major championship, there is a level of excitement for the whole city,” says Dick Raskopf, SIGG publisher. “We have more wherewithal and flexibility to create and can work better with the sponsors off the course than on the grounds.”

Drawing on its Nissan experience with college football and its iconic SI swimsuit franchise, SI at the Majors is another multiplatform model with similar potential to generate product extensions and additional revenue. “There are a lot of fans who want to know what it’s like to be in the shoes of some of our reporters,” Raskopf says. “These championships are like four mini-Super Bowls, so why not create another way for all the marketers to be involved in all the major championships and do cool things for them like collect email addresses and promote specific brand experiences that they will have the flexibility to do under our editorial experience.”

It also offers the SIGG added media muscle during key golf event weeks. “We reach 12 million golfers when you combine all our titles,” says Raskopf. “We reach a lot of people, but sometimes we don’t get the same visibility that another media partner would get around that week. So we said, we should have some fun and get consumers one-to-one to come in and see what it’s like to be a part of the action.”

To access that action, attendees sign in then receive an RFID wristband or bracelet which links to their Facebook page or Twitter feed with news, status updates and moves them more efficiently through sponsor activations. Presenting sponsor Southwest Airlines, which is sponsoring the main stage and editorial hub, is promoting its Rapid Rewards program and enrolling attendees via iPads and a 42-inch digital screen. Those who enrolled got to view exclusive aerial shots of the Masters. Another perk for fliers: Golf bags fly free on its flights. Macy’s, which is promoting a new line of Greg Norman golfwear, is offering free golf lessons from Golf Magazine’s network of Top 100 teachers alongside displays of the clothing. Myrtle Beach Golf Holiday, the largest amateur golf destination in the U.S., is providing a photo op in which attendees can have their photo appear on the cover of Sports Illustrated. The partners get plugs when content from the event goes live onto golf.com and si.com as well as mentions in the print editions.

For Southwest Airlines, the sponsorship offers access to a desirable demographic in relevant markets, but also connects with that target in a unique way. “Nobody has really connected all of the majors in that way with a unique, tangible experience,” says Simon Fletcher, manager of brand engagement at Southwest Airlines. “We’ve made the experience of having a one-on-one dialogue with golf experts and interaction with the editorial content attainable for people who attend the event.”

For their part, the attendees seem to be having a lot of fun. After The Masters, which is a small market, but a huge golf event, 87% of attendees deemed SI at the Majors “excellent” or “very good,” and half of the attendees had their photo taken at the Myrtle Beach photo op. (Agency: Team Epic, Smyrna, GA).

“We’re one-quarter of the way there, Raskopf admits. “We’re curious how it will work in the downtown venues.” If the first stop is any indication, SI at the Majors should be a hole-in-one. EM