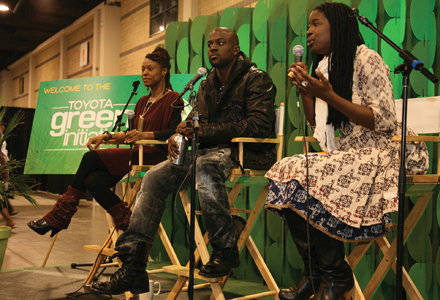 In the battle for mindshare among automakers that make alternative fuel and hybrid vehicles, it’s no longer enough to simply target the eco-conscious. If they hope to capture consumer interest—and market share—as the clean energy movement evolves, today’s auto brands need to grow the green consumer market, too, and make a case for sustainable lifestyle purchases to new demographics.

Toyota did just that with its Toyota Green Initiative tour, a program it created to make deeper connections with African-American college students and increase reach and awareness for its hybrid vehicles among that demographic. The tour is an extension of Toyota’s philanthropic efforts in the two principal areas of environmental education and environmental stewardship.

The multi-prong, six-month initiative that started last October incorporated an online component, on-campus activations at Historically Black Colleges and Universities (HBCU) and a mobile tour with three levels of activation. It culminated on March 5 at the Central Intercollegiate Athletic Association’s (CIAA) basketball tournament Toyota Men’s Final Game, where the brand set up its Toyota Fan Experience.

“The HBCU setting was a prime platform to simultaneously increase our commitment to the African-American community while communicating the benefits of adopting a greener lifestyle,” says Zoe Zeigler, marketing communications strategist at Toyota, who handled the program. “The primary objective was to make the Toyota brand message relevant to African-American audiences in a way that creates an emotional connection by leveraging Toyota’s commitment to education and the environment.”

The tour footprint welcomed students with an 18-foot TGI Green Future Tree made of recycled Toyota car parts created by artist Keith Greco, powered by a TGI branded solar generator. Toyota’s hybrid vehicles—Prius, Camry Hybrid and Highlander Hybrid—were peppered throughout the experience to educate consumers on the benefits of Hybrid Synergy Drive. The experience included a Toyota Hybrid Seek & Find Quiz, which encouraged folks to explore the vehicles on display and find answers to trivia questions to win prizes. The data capture consisted of signing up on the initiative’s website; all who did received branded seed-cards made of biodegradable materials and wildflower seedlings. The cards also had a link with a unique code redeemable for download of one song from a library of music. Consumers could also play a tossing game by throwing recyclable materials like plastic bottles, newspapers and aluminum cans into recycle bins. Winners received branded reusable totes or bottles.

The Green Initiative tour visited the National Urban League Conference, BET HBCU College Tour, CIAA Mobile Spring and Fall Tour and CIAA Homecoming/Rival Football games at Bowie State University and Virginia Union University. At each stop, students were encouraged to register on toyotagreen.com where they could enter an electronic “Promise to Go Green” and sign up for the Toyota Green Initiative Contest open to CIAA students that wished to submit a plan for a green community activity for their college campus. One student per campus, 13 in total, was selected to activate his or her plan. The top four and their guests were flown to the CIAA tournament where the winner was announced and awarded a Prius Hybrid one-year lease and a Toyota Tree Park for their campus. All participants received a digital camera and a $500 stipend towards their green campus plan.

In conjunction with the tour, Toyota formed a TGI coalition of eco-conscious thought leaders, influencers and celebrities like actor Lance Gross from TBS’s sitcom “House of Payne” and a HBCU college grad. These folks shared their message at Bowie State University and Virginia Union University on how African-Americans can adopt and benefit from a green lifestyle. This included a lecture series and a clean-up of the campus. At the CIAA basketball tourney, the message went mainstream as Toyota saw more than 200,000 people go through its on-site experience.