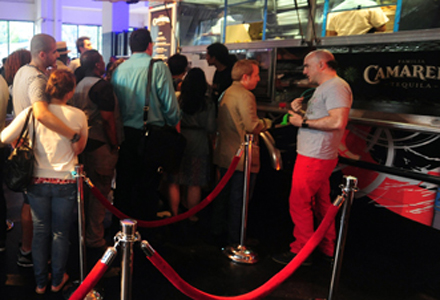 After its success in Los Angeles and Nevada last summer, the Familia Camarena tequila brand launched its Camarena Taco Truck in New York City on May 25 and is in market through June. Two additional trucks will be making stops in Austin, Chicago, Dallas, Houston, Los Angeles, Oakland and San Francisco. The brand has partnered with Chef Jesse Vega of Sueños restaurant in Manhattan to create tequila-infused tacos, which allows it to sample the spirit without actually serving it to consumers in a shot glass on the street.

Targeting primarily millennials, the brand is keeping consumers up to date on stops and tour information via Facebook and Twitter. This year it has also developed its own event app to streamline the process of having brand ambassadors sign up consumers to its Facebook and Twitter pages via iPads on-site. The brand ambassadors are also well versed in general tequila knowledge to help consumers understand why they should pick Familia Camarena over other tequila brands.

“The millennial generation is a generation of consumers that wants to buy things based off of experience and discovery,” Kylie Garrett, public relations spokeswoman at Calhoun Wine, who handled the program, told Buzz. “The Camarena Taco Truck taps into this consumer desire. Even though consumers haven’t tasted the product directly, if they had a positive, memorable experience with the truck and the brand, the likelihood that they will identify positively with the brand beyond the truck experience is largely increased.”

Consumers are also encouraged to take a picture with the truck, which the brand posts on Facebook and Twitter where they’re also giving out branded t-shirts and shot glasses to their followers. Agency: Rebel Industries, Los Angeles.