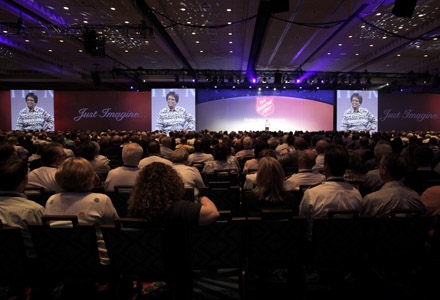 When you think of The Salvation Army, Disney doesn’t necessarily spring to mind, but the entertainment giant helped bring to life the theme of the charitable organization’s five-day conference last month at Disney Coronado Springs Resort in Orlando, which attracted 2,200 business leaders and volunteers. The goal of the event, which takes place every four years, was to inspire and motivate local and national Salvation Army board members and to help move beyond its image as the recipient of spare change and old clothing.

The theme of the meeting, “Just Imagine,” played out across a 20-foot high by 275-foot wide solid projection screen in the resort’s main ballroom for the opening production. Layered over that surface, and around the room, customized floor-to-ceiling screens projected portraits of Salvation Army heroes as uniformed officers recounted four family “success” stories via an enormous, multimedia scrapbook.

Prominent volunteers received the organization’s Evangeline Booth lifetime achievement award, including a surprise presentation to Disney master animator Glen Keane, who earlier had entertained attendees at the gala banquet. Keane, armed with a pencil, a sketching table and overhead camera, drew the characters he created for Disney films, including the Beast from “Beauty and the Beast” and Ariel from “The Little Mermaid” and discussed his transformation from “wild man” to committed Christian as his artistic inspiration. Broadway star Jodi Benson, the voice of Ariel, performed a medley of Disney and Gershwin songs, including “Part of Your World,” the signature tune from The Little Mermaid. An auction of Keane’s original sketches raised $20,000, which was donated to The Salvation Army’s relief efforts.

“When I thought about the content of the program, and because we were in Disney, we sought out candidates for the award that would allow us to create a program around them,” Major George Hood, chief communications officer at The Salvation Army, told Buzz. “We had a film producer, musical artists and an animator, and people are still saying how phenomenal it was. We built the whole package around Disney and animation.” Agency: Corporate Magic, Dallas.